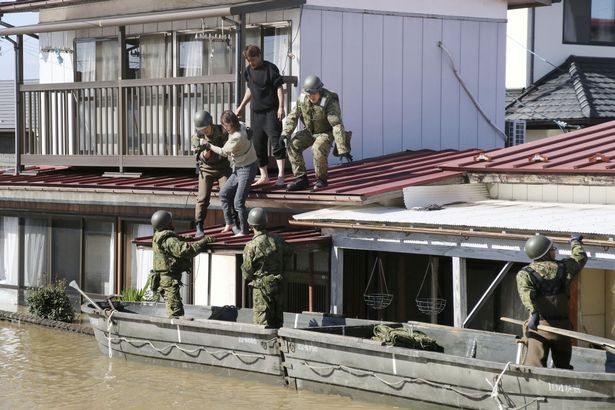 On the international news beat, at least 23 people are dead with 16 missing after the most powerful typhoon to hit Japan in decades “destroyed homes and paralysed Tokyo this weekend.

The Mirror reports nearly 30,000 soldiers and rescue workers were “sent in to save stranded residents in areas such as Nagano, and to fight floods after low-lying land was inundated during Typhoon Hagibis”.

“Military helicopters airlifted stranded people from homes, some cradling their children, after they were trapped by water reaching the roofs of their houses,” the report said.

“Half a million homes were without electricity after Hagibis triggered floods and landslides and spawned tornadoes while packing 140mph winds and bringing record rainfall of almost 40 ins in just 24 hours.

“The death toll increased on Sunday as officials announced more than 165 others were injured.

“There were irregular readings from sensors monitoring water in the Fukushima Daiichi nuclear plant which was crippled by a 2011 earthquake and tsunami,” the report added.

More than 800 flights were cancelled at Tokyo’s airports as Hagibis headed out to sea.

While some stores reopened on Sunday, some “services to the worst-hit areas were halted” as there was “still a risk of flooding in eastern Japan, where rivers were swollen”.

Japan’s Prime Minister, Shinzo Abe, held an emergency Cabinet meeting saying: “The government will do everything in its power to cooperate with relevant agencies and operators working to restore services as soon as possible.”

Footage broadcast showed fields and vast residential areas in parts of central and eastern Japan covered in brown water, with some of the worst damage caused by Chikuma river in Nagano prefecture.

“They also searched for survivors in homes destroyed in landslides near Tokyo’s suburbs and in Fukushima prefecture,” the report said.

“Hagibis, which means ‘speed’ in the Philippine language Tagalog, made landfall on Japan’s main island of Honshu on Saturday evening and headed out to sea early on Sunday, leaving behind cloudless skies and high temperatures across the country.

“A magnitude 5.7 earthquake shook Tokyo shortly after the storm made landfall.

“Authorities at one point issued evacuation advisories and orders for more than six million people across Japan as the storm unleashed the heaviest rain and winds in years.

“Rain and flood warnings were being lifted in many places, although flooding remained a threat in some eastern parts of the country.”

“Before and during the storm, the capital’s main airports, Haneda and Narita, stopped flights from landing and connecting trains were suspended, forcing the cancellation of more than a thousand flights.

“Many people in and around Tokyo took shelter in temporary evacuation facilities early, before the worst of the storm arrived.”