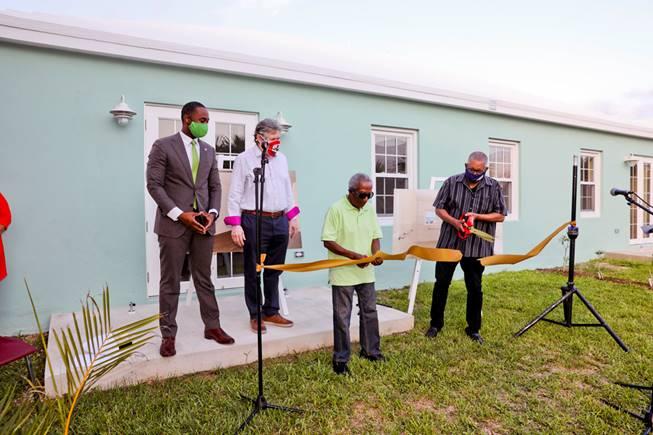 Based on the latest report, the Bermuda Housing Trust (BHT) “remains in a strong financial position”.

That was the bottom line in the BHT Audited Financial Statements for the fiscal year ending 2020, tabled in the House of Assembly on Friday (Feb 19) by Public Works Minister, Lieutenant Colonel David Burch.

“The BHT manages five (5) properties – or close to 200 units. All of these properties are ageing with some dating as far back as the late 1960,” said Colonel Burch.

“As with any aged facility, the maintenance demands and associated costs continue to increase. Notwithstanding, the BHT has remained committed to the upkeep of these buildings to ensure they can be occupied safely by our seniors.

“The trustees are also mindful that the BHT carries an outstanding loan balance with HSBC which is just over $5 million,” he added

“The trustees are trying earnestly to discharge this loan by not only ensuring the monthly payments are met, but by applying annual payments on the principal – with last year seeing the sum of $250,000.00 going towards that debt.

“The original capital loan to the BHT was for the sum of $12.5 million some 15 years ago. These funds were borrowed to advance the construction of the Dr Cann Park facility in Southampton – which houses close to 100 seniors.”

He also reiterated the Government’s commitment “to caring for seniors and helping them to age with dignity”, as noted in the 2020 Speech from the Throne.

“The knock on effect of the increase in the senior’s population is the increased demand for homes for this cohort that want to live independently.

“The BHTs mission, mandated by statute, remains consistent and that is to provide homes for seniors that afford them the freedom to live independently – and making these units available by charging the most affordable rents possible. And incidentally, the BHT continues with its policy of not raising rents on sitting tenants notwithstanding the continuing need for maintenance and rising costs.

“At the start of the last financial year, the BHT embarked on an ambitious renovation and conversion project at the old Navy Home at Ferguson Park in St David’s…..with the goal of adding two additional units to its housing stock,’ he added.

“Now, two additional homes may not seem earth shattering, especially when there is a consistent waiting list of 50 seniors…..but it was an important project for other reasons.

“This project was the fruit of a partnership with the Ministry of Public Works that was designed to serve as the template for future building projects the BHT would like to undertake.

“The Ministry provided much needed services at no cost by making available to the BHT one of its architects, from the Bermuda Housing Corporation, Mr Keino Furbert-Jacobs, who supervised the project from inception through tendering – and then the supervision of the project to completion.

“Completion occurred in August of 2020 when Westcott Cottage was officially opened by the Premier, Minister of Public Works and the BHTs oldest resident at Ferguson Park, none other than Mr Brownlow Place who is 104 years old.

“Unfortunately, the building project was delayed when COVID-19 struck and work had to be stopped for a period of time.

“While there were two unexpected change orders, mostly on account of what was found at the home during construction, the project was completed within budget. So at this point, I would like to acknowledge Mr Steven Daniels of Daniels Construction for the first class work done at Ferguson Park.”

But the global COVID-19 pandemic “also impacted what the BHT was able to do in terms of its own operation and maintenance of other properties”, he added.

Moving forward, he said: “The BHT fully anticipates that maintenance will resume as COVID-19 restrictions ease – and this should impact the bottom line in the current and subsequent financial years as the BHT attempts to get its maintenance and repairs back on schedule.

“Meanwhile, the trustees are aiming to employ the public partnership model that was used for Westcott Cottage as an example of what can be done in the development of another property for seniors.

“This template is also key and, the BHT believes, appealing to donors, who are engaged to assist seniors. Important partners all coming together to help advance the quality of life for seniors by the provision of accommodation at the most favorable rates available.”

For those “wishing to know more about the BHT or donate towards any development of the properties can visit the BHT website at www.housingtrust.bm or call the office at 292-1322″, he added.

“I would also like to make special mention of the Chairman of the BHT, John Barritt JP, and the Deputy Chairman and my colleague,,,Mr Vance Campbell, and the Board of Trustees for their tireless work at the BHT.”

The Minister concluded: “There is so much that goes on behind the scenes that the average person is completely unaware of – and this for the most part becomes a thankless job.

“Therefore, I want to personally say thank you to both gentlemen and the Trustees for all they give back to the senior’s community.”

Queen Put To Rest With Philip, Her Parents In Windsor Chapel