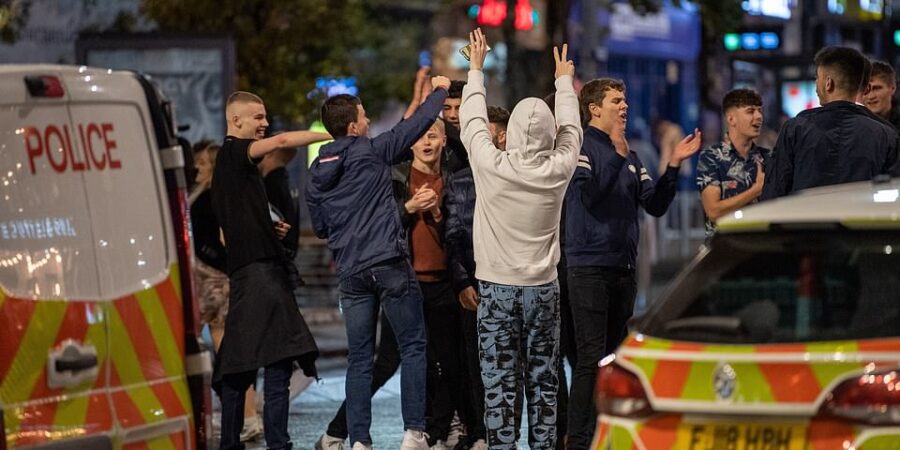 Daily Mail Online: LONDON, England – London could be plunged into Tier 3 lockdown within two weeks as England creeped closer towards full national lockdown by the back door last night, with millions told they will face extra curbs.

Boris Johnson is facing renewed pressure from his medical officers to impose a nation-wide shutdown before and after Christmas in a bid to allow families to gather over the holidays, and sources close so Sadiq Khan expect the capital to be locked down imminently.

Senior figures are warning that the UK’s three-tier system is not enough to ‘get on top of the numbers’, with deputy chief medical officer Jonathan Van-Tam reportedly beginning to change his mind over whether regional lockdowns will suppress the virus . He backed the move at a No 10 press conference last week

Presenting what one source called ‘very, very bleak’ data to a meeting of Covid-O, the the Cabinet subcommittee on coronavirus, he said that daily hospital admissions had reached the highest level since April at 1,404.

There are fears that the whole country will be at Tier 3 by Christmas, and unable to meet extended family members unless the Government takes harsh, draconian action before the season.

Allowing people to visit family at Christmas will be a spreader event that could cause a spike in infections many times worse than that caused by the return of university students, experts believe. 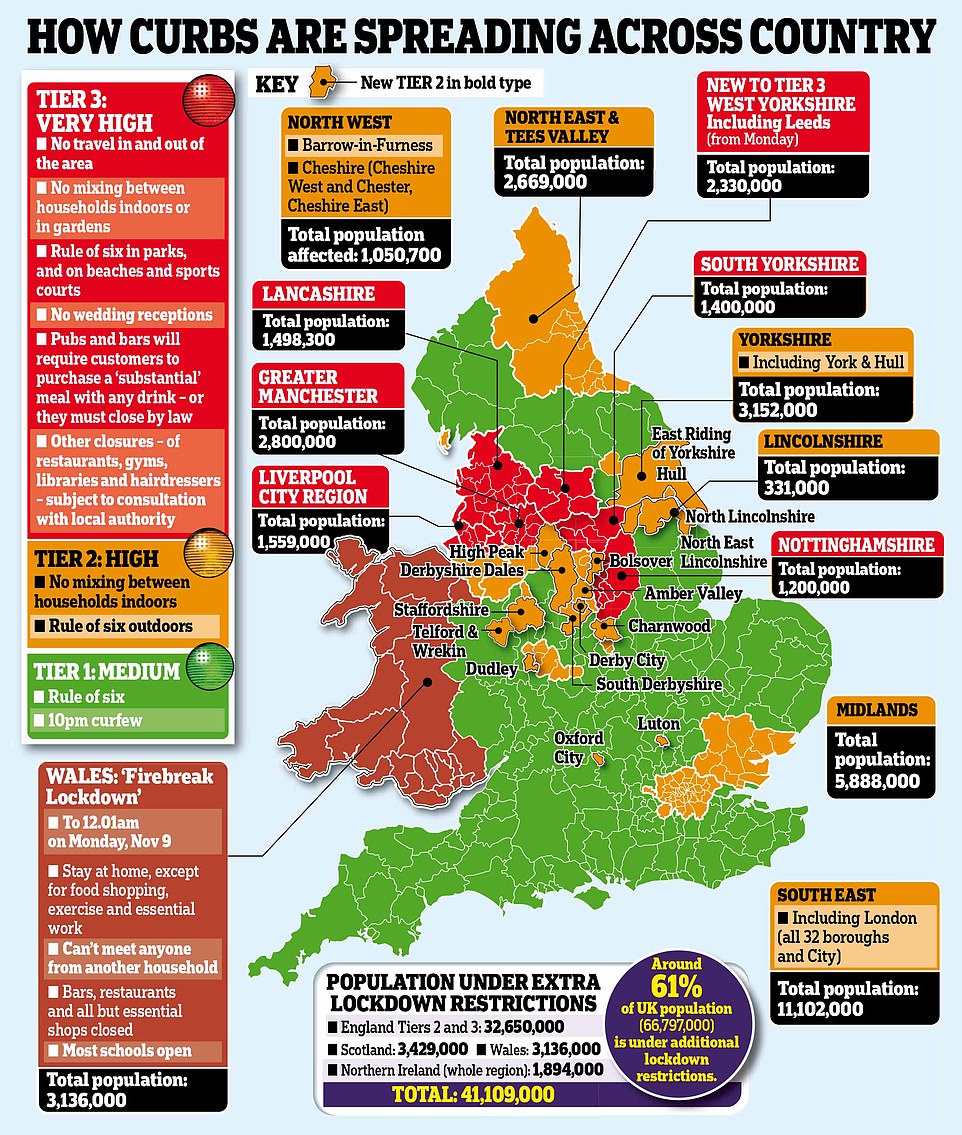 But introducing national restrictions before and after Christmas, while lifting them for the big day could help minimise the impact.

One senior health official told the Telegraph that anti-Covid measures were most likely to be successful if they were taken on a national basis rather than toughening up the rules for Tier 3.

They added that a post-Christmas ‘circuit-breaker’ lockdown could also help reverse numbers and curb rising numbers of hospitalisations as fears spread that Britain’s ICUs could be overrun.

‘Releasing measures for two days is unlikely to cause a big upswing,’ a source said.’ But it won’t do nothing. Christmas brings people from all over the country to sit inside together, so its quite likely to be a spreading event.

‘But people want to see their loved ones and they want to make physical contact, and we have to recognise that.’

Almost 60 per cent of the population – around 32.6 million – will be under stricter rules by Monday, and it is understood London could be moved into the top tier in two weeks unless infection rates drop significantly.

Sixteen areas will move into the ‘high risk’ Tier 2 at midnight including Oxford, Luton, East Riding of Yorkshire, Kingston Upon Hull, Derbyshire Dales, Derby and Staffordshire

That means that more than 21.6 million face the restrictions that include a ban on socialising indoors with anyone from another household, whether at home or in bars, restaurants and cafes.

It comes after SAGE piled fresh pressure on the Prime Minister to impose tougher restrictions as it warned up to 85,000 people could die in a second wave. A ‘reasonable worst case scenario’ put forward by SAGE suggested daily deaths could remain above 500 for three months or more until March next year. 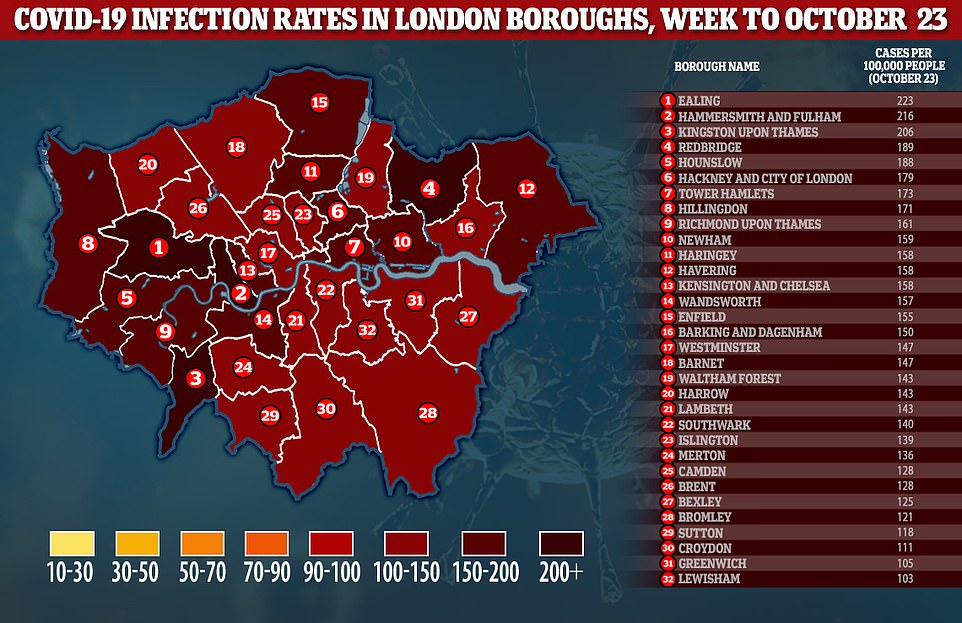 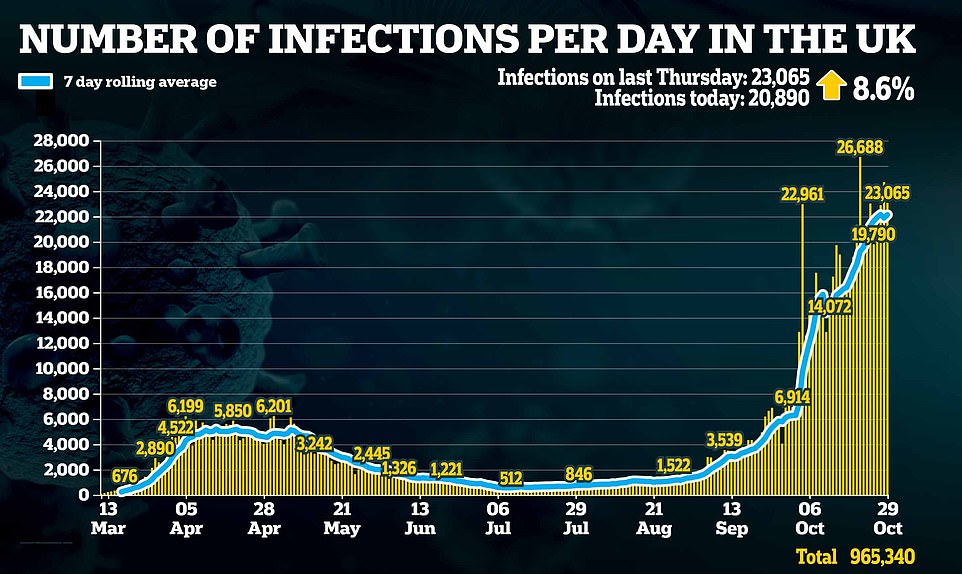 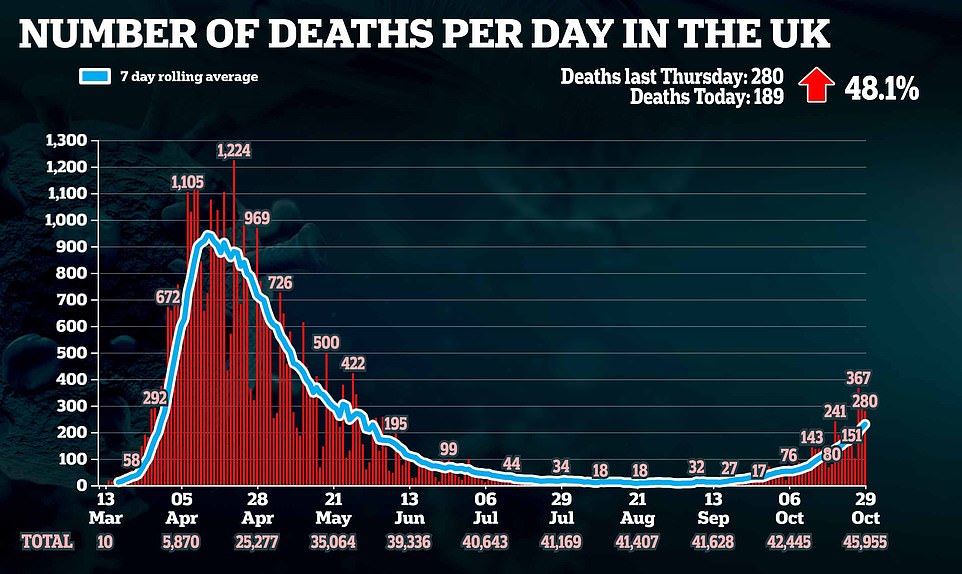