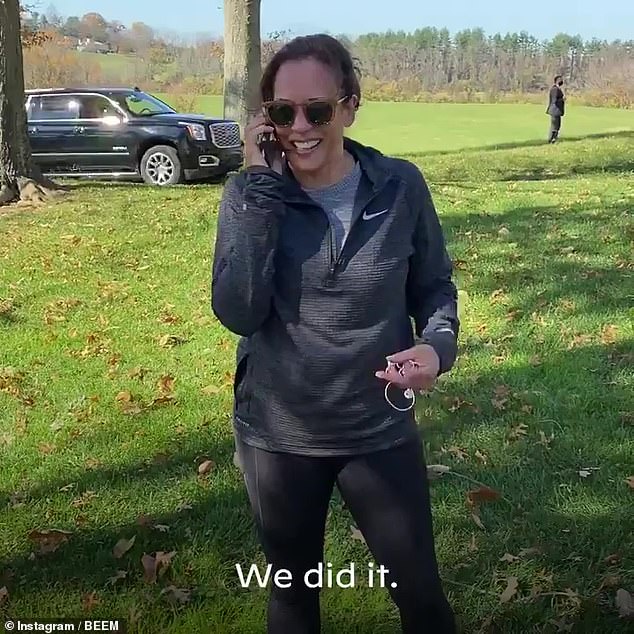 Mail Online: LONDON, England – “We did it, we did it Joe” squealed Vice President-Elect Kamala Harris yesterday as she congratulated Joe Biden on his victory.

The video of the 56-year-old – which showed her in running gear embracing her husband Douglas Emhoff – contrasts sharply with her comments 18 months ago which threatened to derail Mr Biden’s bid for the White House.

In a debate involving Democrats vying for their party’s nomination to take on Donald Trump, Ms Harris asked to speak about ‘the issue of race’ and proceeded to accuse Mr Biden of making “very hurtful” comments about having worked with two segregationist Senators.

“I do not believe you are a racist,” she said.

“But it is personal.” He denied her claim, but his support slumped while hers soared.

Now the pair will make history together – he as the oldest ever President, she as both the first female and the first black and Asian American to be Vice President.

Branded a radical Left-wing socialist by Mr Trump, Ms Harris is so woke that she lists her personal pronouns – ‘she/her’ – in her Twitter profile.

Her mother was from India and her father was Jamaican. After they divorced, she was raised by her Hindu single mother, Shyamala Gopalan Harris, a cancer researcher and civil-rights activist.

“My mother used to have a saying, and she would say to me, “Kamala, you may be the first to do many things, but make sure you’re not the last,” Ms Harris recalled last year.

Given Mr Biden’s age, it is thought likely she will contest the next Presidential election for the Democrats in 2024.

A lawyer and former attorney general of California, she initially soared through a crowded field of Democratic candidates, only to drop out when her early gains faded. 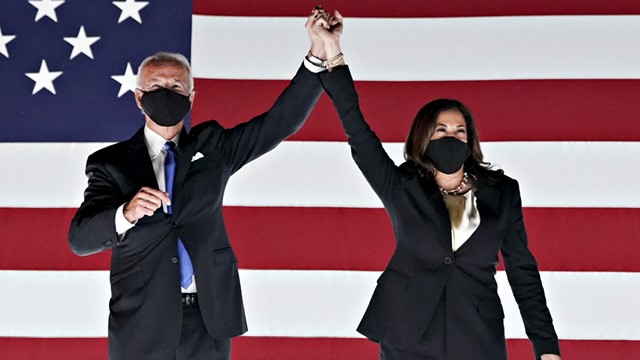 It was therefore a surprise when Mr Biden announced that he had chosen her to take on Mr Trump and his running mate, Vice President Mike Pence.

In a volte-face, Ms Harris tweeted: “Joe Biden can unify the American people because he’s spent his life fighting for us.”

The United States first female vice president was seen congratulating Joe Biden over the phone yesterday, 18 months after she accused him of making ‘hurtful comments,’ about having worked with two segregationist Senators. Given Mr Biden’s age, it is thought likely she will contest the next Presidential election for the Democrats in 2024.

She has taken a noticeably more moderate stance in recent months – being notably muted on calls by Black Lives Matter activists to defund police departments, arguing instead there should be “reform” instead.

Last year, she backed a Senate bill to legalise cannabis across America, adding: “Times have changed – marijuana should not be a crime.”

It represented a U-turn from her time as attorney general when she took a hardline stance on the drug, which critics said disproportionately affected ethnic minority communities.

Ms Harris has also co-sponsored bills calling for tougher gun-control measures and ‘Medicare for All’ to establish a US health system open to everyone.

While a rising star in Democratic politics for the past two decades, she was elected to the Senate only in 2016 – but has never shied away from her ambition.

“My mother always used to say: ‘Don’t just sit around and complain about things. Do something,’ she tweeted after Mr Biden announced that he had chosen her as his running mate.

“I dearly wish she were here with us this week.”

Her mother came to the US in the early 1960s to attend the University of California, Berkeley, and met Ms Harris’s father Donald, an economics professor, at a civil-rights protest. They married, but divorced in 1971.

Her childhood included a spell in Canada when her mother took a job teaching in Montreal before the family returned to California.

Ms Harris went to Howard University, one of the top black colleges in America, and earned her law degree at the University of California.

She became the district attorney for San Francisco in 2003, before being elected the first woman and the first black person to serve as California’s attorney general.

Ms Harris insists she has always been comfortable with her identity and describes herself simply as ‘an American’.

In an interview with The Washington Post, she argued that politicians should not have to fit into compartments because of their colour or background.

“You might need to figure it out, but I’m fine with it.”

She married Mr Emhoff, a lawyer, in 2014 and became stepmother to his two children from a previous marriage.

In an interview with Elle magazine last year, she said: “When Doug and I got married, Cole, Ella, and I agreed that we didn’t like the term ‘stepmom’. Instead they came up with the name ‘Momala’.”

Yesterday, her husband shared a picture of the couple hugging on Twitter, adding: “So proud of you.”

“This election is about so much more than Joe Biden or me,’ she wrote. ‘It’s about the soul of America and our willingness to fight for it. We have a lot of work ahead of us. Let’s get started.”