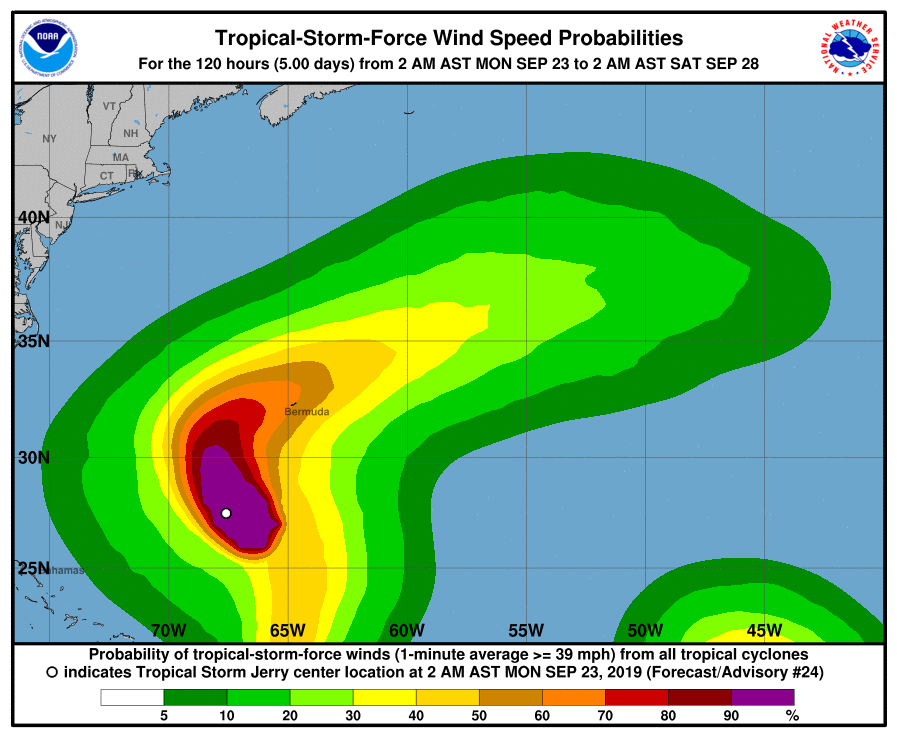 Forecasters at the Bermuda Weather Service (BWS) have posted a Tropical Storm Watch for the local area, as Jerry “is expected to bring tropical storm force winds with possible hurricane force gusts to Bermuda later on Tuesday”.

At last check, Jerry was moving NNW with maximum sustained winds at 65 mph.

According to the latest update by the National Hurricane Center (NHC), as of 5am on Monday, Jerry was located at 27.8N 67.7W moving at 9 mph.

“Large swells are also expected to affect the coast of Bermuda during the next few days.

“These swells could cause life-threatening rip currents,” the NHC said.

The BWS added: “Ahead of Jerry, expect easterly winds to increase, clouds to thicken and patchy light rain with a few embedded showers as of late this evening that grow into a thunderstorm or two on Tuesday.”

Seas will become rough and dangerous during Tuesday.

Meanwhile, “disorganised Karen” continues to move slowly northwestward across the southeastern Caribbean Sea, with tropical storm warnings issued for Puerto Rico and the US Virgin Islands.

Tropical storm force winds, heavy rainfall and flash flooding are possible on these islands by Tuesday, the NHC added.
AccuWeather forecasters believe “Jerry will track close enough to Bermuda to deliver a period of soaking rainfall, gusty winds and rough seas prior to midweek”. 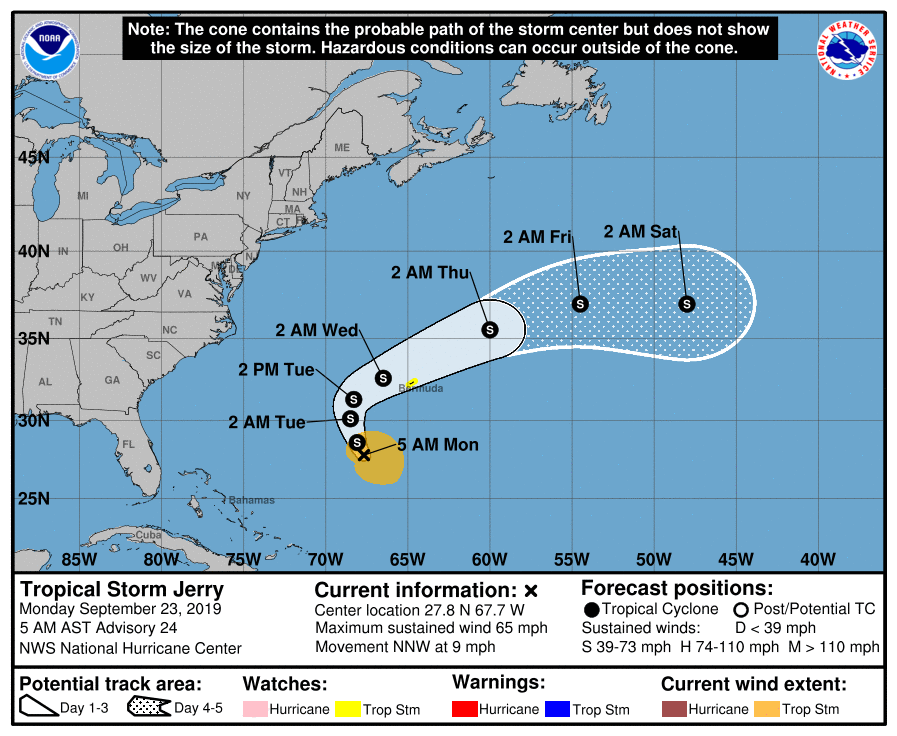 The storm weakened from a Category 1 hurricane to a tropical storm early Saturday morning while passing a few hundred miles to the north of the northern Leeward Islands, Virgin Islands and Puerto Rico.

“Although Jerry is currently moving toward the north-northwest, a cold front set to sweep off the East Coast of the United States on Monday will pull the tropical system northward early this week.

“While this northward turn will spare the United States from direct impacts, Jerry’s projected path may put the storm on a collision course with Bermuda,” the report said.

The storm is expected to pass just to the north and west of the islands.

Jerry is expected to be a strong tropical storm on its closest approach. A tropical storm has maximum sustained winds of up to 73 mph with higher gusts.

“These impacts will be amplified if Jerry passes right over the islands.”

But this scenario appears “unlikely” at this point in time.

Ms Gilbert added: “Bermuda’s building codes require dwellings to withstand sustained wind speeds of 110 mph (177 km/h), which is the equivalent of a high-end Category 2 hurricane. A majority of properties are made of stone and mortar.

“As a result, structural damage is unlikely to occur with Jerry, even with its projected path very close to Bermuda.

“However, gusty winds can toss around loose items like toys and cause them to become potentially deadly projectiles. Isolated power outages and tree damage may also occur.

“Residents should make sure to secure or safely house any outdoor furniture, planters or decorative items ahead of Jerry’s arrival.

“Waterspouts can occur within Jerry’s rain bands,” she said.

In the wake of Jerry, several other tropical disturbances are being closely monitored across the Atlantic basin, including Karen.