Hard on the heels of the 35th America’s Cup World Race Series comes news in the international media questioning why Bermuda decided to host the event at the expense of millions of dollars to local taxpayers. 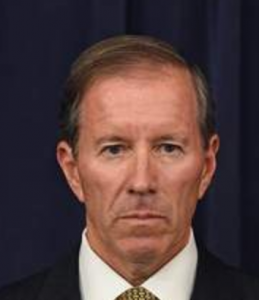 In an article, featuring a grim-faced photograph of former Premier Michael Dunkley, Sailing Anarchy has published a hard-hitting post AC35 editorial on their website sailinganarchy.com.

The self-professed international sailing news website promotes itself as an “insightful” source in the world of sailing, that publishes “real stories about people and events” that are either “ignored or whitewashed”.

In their ‘About Us” description, the editor states up front that: “Many boat reviews are nothing more than politically correct spin to ensure the advertising revenue is not jeopardized.”

Having said that, Sailing Anarchy’s Editor/Publisher Scot Tempesta said it’s “time to change all that”, as they “present topics, ideas and, critiqes that have never been written about before – anywhere”.

With regards to opinions on the website, readers are warned “you better prepare for a healthy dose of reality”. “This is where the big kids play. If you can’t stand the heat, there are other places for you of the more sensitive in nature.”

The description continues: “Where the hell else are you going to have this much freedom to say what you want? After all, that is ultimately what Anarchy is all about.”

Needless to say the recent editorial, entitled “Russell was here”, on the aftermath of AC35, hosted for the first time ever here in Bermuda’s Great Sound, spread like wildfire on the local social media circuit since it was published. But it has yet to be published or highlighted by Bermuda’s mainstream media.

In the interest of transparency and accountability, therein lies the growing popularity of independent media in Bermuda. And in keeping it REAL, here’s what Sailing Anarchy had to say after, as the title states “Russell was here”, and Bermuda’s electorate subsequently ousted the former One Bermuda Alliance government:

“Like a whirlwind of brilliance and carbon fiber, Russell Coutts leaves a path of devastation behind him. First in NZ, where to many he is still one of the biggest traitors in the island’s sporting history. Then to Switzerland, where his divorce from Alinghi was so nasty there was a rule written specifically to ban only him from AC32.

“Then to the US, where after a brilliant comeback and a great event in San Francisco, he found ways to completely alienate the majority of the team’s American supporters for the recent Cup:

“First by removing the competition from the country that won it; second by decisions that brought bad ratings and made it expensive (or downright impossible) for Americans to watch the majority of racing, and third by saddling San Fran with an unexpected, 8-figure bill – a move that ensured no US host cities bid for the event with even a fraction of what Bermuda came up with.

“It appears that familiar old Coutts tornado has left another wrecked venue in its path now that results are in from the parliamentary election we reported about before the Cup that was held this week in Bermuda.

“On Tuesday’s General Election, the mostly white, ruling One Bermuda Alliance party (the OBA – jokingly called Oracle Booster Association in online chatter) suffer a crushing defeat at the hands of the mostly black Progressive Labor Party, many of whose members had been strongly critical of the money spent to bring the AC to the island.

“The election was a true landslide in the tiny island nation, with the PLP receiving 20,059 votes, or nearly 59 percent, while the OBA secured 13,832, with resigning PM Michael Dunkley complaining that the biggest issue in the country is its ‘racial divide’.

“While we are certain that there are much bigger, far reaching components to the OBA’s thumping than just the America’s Cup, it probably didn’t help the race problem to spend millions and millions of dollars on perhaps the least racially diverse sport on the planet?”

Police: The Hunt Is On For Driver Who Left A Mother’s Only Son Dead In The Street In Hit-And-Run Fatality