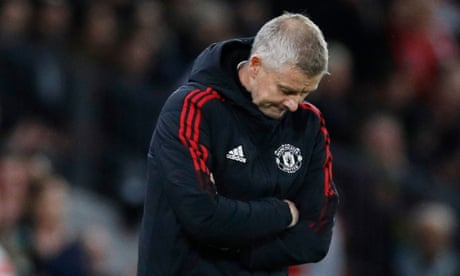 The Guardian: LONDON, By Barney Ronay at Old Trafford – What was this thing, exactly? For 90 minutes at Old Trafford the players of Liverpool and Manchester United produced something that resembled, in its colours and shapes, an elite-level football match. In practice it felt like something else: a kind of ritual humiliation, certainly, a real-time study in how to empty, safely, four-fifths of a football stadium.

Mainly it was just a gruesome spectacle, something seasick and rotten, a team in a state of high‑priced sporting decay caught pinned and wriggling under the lights.

This is a little unfair on Liverpool, who were majestic, an entirely coherent team led by the outstanding player in the world right now in Mohamed Salah. Salah’s game in numbers: seven shots, three goals, one assist, 96 percent passing accuracy, and barely a sweat broken. Salah has 15 goals and three assists in 12 games this season. It has been a near-perfect sequence. Is he the best, most decisive, most delightful player in the world right now? Is this even a serious question?

This was perhaps the oddest part of United’s collapse, a performance of such stunning ineptitude it seemed to be competing with Salah to become the story, like a drunken uncle at a wedding party roaring and grizzling just out of shot.

What are we supposed to make of this? How to analyse such a putrid display? The word from inside United has been consistent: Ole Gunnar Solskjær is under no pressure, is still seen as the man to take this dizzyingly expensive investment forward. And yet here we had a performance so poor it was tempting to ask if there has been a worse half of football by a Manchester United team that anyone can remember.

There were lows under David Moyes, some lost afternoons under José Mourinho and Louis van Gaal. But nothing quite so deathly, so free of structure, love, basic competence. Factor in that United can field four of the top five best‑paid players in the league and it seems fair to ask if there has been a worse performance since this club were relegated in the 1970s. What does it take to accept that this is simply becoming a humiliation for everyone involved, an endless trauma. We are moving into alien territory here.

Meanwhile the problems in this United team are obvious: a basic slackness, a lack of resistance, too many basking stars. And not just a poor plan, or a badly executed plan, but no plan at all, a team unbalanced by an aged celebrity centre-forward, poorly coached and complacent, with a manager in the job because of heritage power and brand-maintenance.

Mainly, it was just strange. In the first half Liverpool kept scoring the same goal. Four times the minimum of moment, energy, thrust just seemed to slice open the centre of this United team.

The sense of these two things happening simultaneously, brilliance and ineptitude, was captured best by the fifth goal just after half time, the moment that completed Salah’s hat-trick. What a lovely goal this was. What a horrible, shapeless, terrible goal this was.

First Fred simply ran past the ball. Paul Pogba was swished aside like a set of net curtains. Jordan Henderson, with time, space and an embossed invitation, played the perfect curled through pass for Salah to gambol on and finish like a man playing against his eight‑year‑old cousins in the park.

Liverpool had opened the scoring after three minutes, a goal that involved walking right through the centre of that soft, malleable, permeable substance known as Manchester United. How is it possible for a team to line up with a hard rump of four defensive players in the centre to also have nothing there, no human flesh? To be so completely unprepared, a team that has come to work having forgotten to put on its trousers? Space opened up. Salah played a perfect pass on to Naby Keïta. He finished nicely.

With 13 minutes gone it was 2-0. This time Harry Maguire and Luke Shaw got themselves into a horrible shemozzle, a half‑wheeled scrum. Again there was no presence in front, no shield. Keïta fed Trent Alexander‑Arnold who, in a stunning break with tradition, apparently undetected by the United tactical plan, was haring down the right wing. 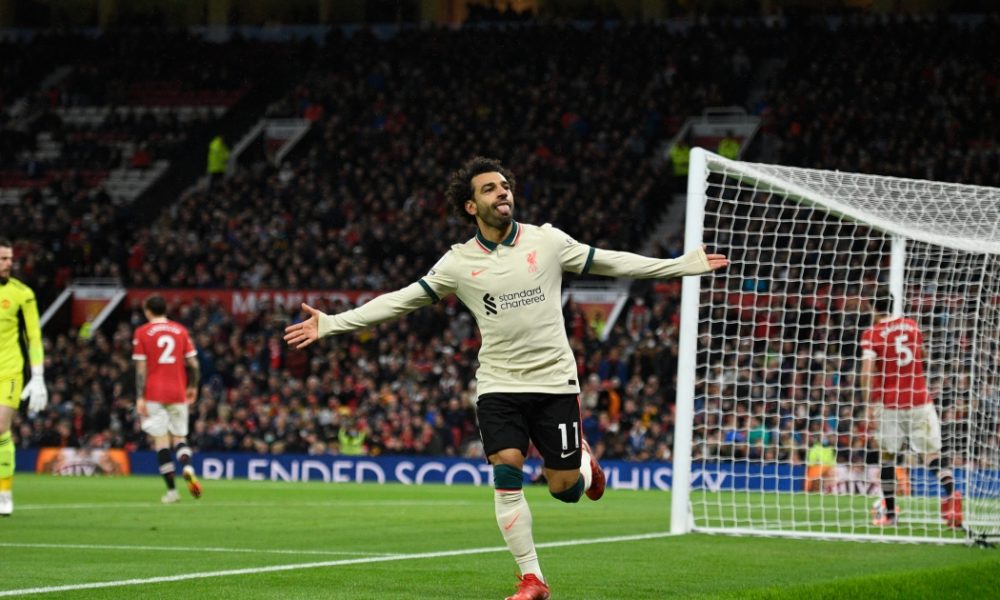 What does it mean, how are you supposed to feel when James Milner is tobogganing gleefully in your six-yard box, not first but second in the queue to tap the ball away from home with 13 minutes gone? This is one of those events that just looks wrong, a raven-free tower, a polar bear on a melting ice floe. But then, you can get used to anything and seven minutes before half‑time it was three.

Salah provided the finish. Keïta again gave the final pass. In added time it was four, with another weirdly facile goal, Shaw pirouetting like a drunken ballerina as Diogo Jota fed Salah, who passed the ball into the bottom corner.

There were other moments, horrors piled upon horrors. Paul Pogba was sent off for a lunge through Keïta, adding a deeper note to an already nightmarish afternoon. Fred was … well, it would be cruel to detail the times he was left sprawling. That desperation at least showed that he was trying, that he cares. Fred is not good enough to fulfil his brief. This is obvious. It really isn’t his fault we have to keep on being presented with this fact.

By the end the away fans were bullying United’s manager, asking for a wave, roaring their approval at his continued steerage of the ship. We want six. Attack attack attack. It should have sounded like exit music. Is anyone actually listening?

Serena Williams Not Done Yet; Wins 1st Match At US Open