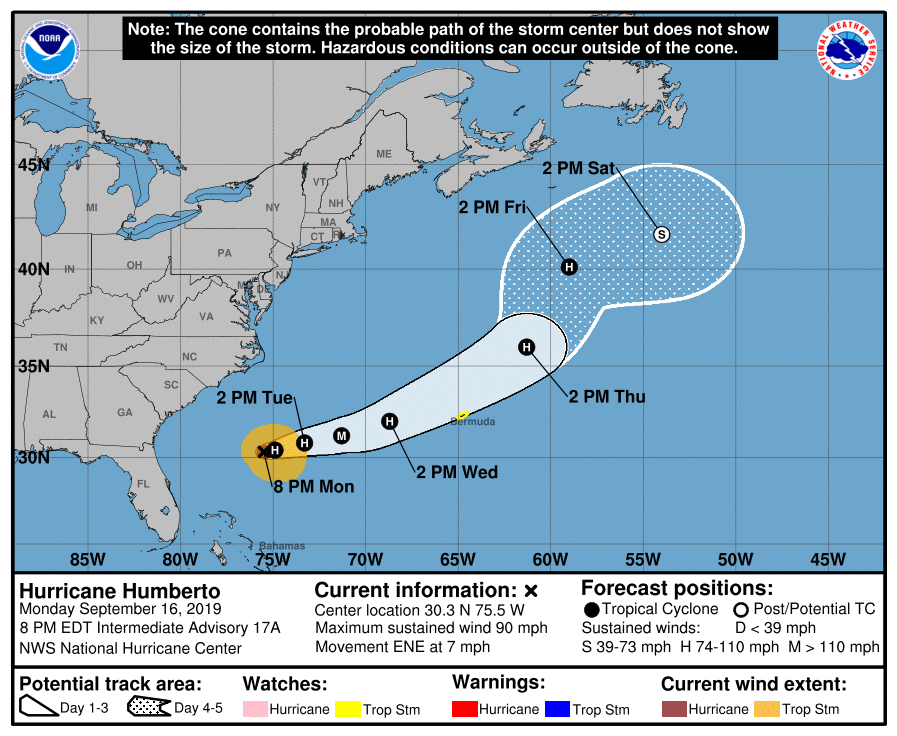 Hurricane Humberto was upgraded to a major Category 3 hurricane overnight as Bermuda wakes up this morning under a hurricane warning for the local area.

As of 10pm Tuesday night, the storm was located some 405 miles WSW of the island, moving and picking up speed, packing winds up to 115 mph.

Forecasters also say the pressure has dropped to 951mb, with little change in the forecast track.

Satellite images show that Humberto will likely maintain Cat 3 strength as it passes through the local area Wednesday night, with hurricane force winds extending more than 60 miles out from its centre.

As the storm continues to strengthen on its current trek toward Bermuda, maximum sustained winds have picked up to 185 km/h.

The National Hurricane Center (NHC) said the forecast track has drifted north, which has lowered the risk of a landfall on Bermuda, but the island remains in harm’s way as the storm approaches.

The NHC expects the storm to remain a powerful hurricane through Thursday.

“Though the centre of the storm is expected to pass just north of Bermuda, Humberto is a large hurricane with an expansive wind field, and that means Bermuda will likely see near-hurricane-force conditions sometime late on Wednesday, even with a near miss.

“Tropical storm winds are expected to impact Bermuda by Wednesday afternoon and linger through Thursday morning and heavy rainfall — as much as 150 mm for some — is expected as the storm passes.

“Humberto will also drive dangerously large ocean swells and breaking waves for Bermuda as well as the southeast coast of the United States for the next few days. Storm surge and large waves are expected to cause flooding in Bermuda, particularly along the southern coast on Wednesday night and Thursday,” the NHC said.

“Longer-range models suggest that some of these major swells may ultimately impact the shores of Nova Scotia as well, though that will depend on the eventual strength and track of the storm. 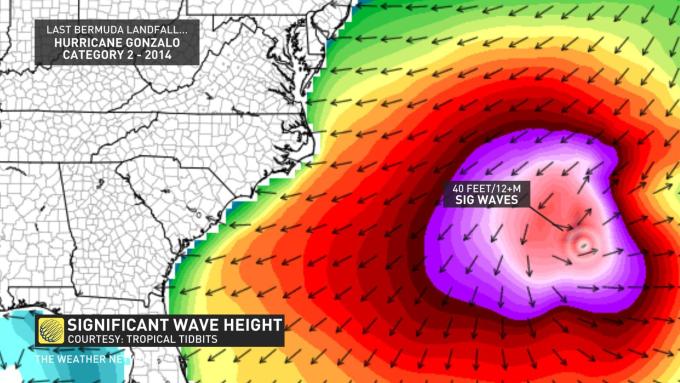 “The last major hurricane to make a nearly-direct hit on Bermuda was 2016’s Hurricane Nicole, which blasted the island with 220 km/h wind gusts and more than 170 mm of rain, even though the centre remained just offshore. 2014’s

“Gonzalo was the last Category 2 hurricane to make landfall.”

Meanwhile, forecasters are keeping a close watch on the next system churning up to threaten the Caribbean as the peak period on the 2019 Atlantic hurricane season continues.

One weather report said late September and early October are usually the busiest times of the year for hurricane season in the Atlantic basin, and 2019 is turning out to be no exception.

A third storm is brewing well east of the Lesser Antilles.

The cyclone, now listed as Tropical Depression Ten, is on track to reach tropical storm strength by Wednesday morning when it will become the tenth named Atlantic storm of 2019 — Jerry.

Although forecasters say “conditions aren’t perfect for this storm’s development, it is expected to take advantage of low wind shear and warm surface water temperatures to strengthen into a hurricane as it approaches the Caribbean”.

“The current forecast track from the National Hurricane Center takes what is expected to be Hurricane Jerry toward the northern Leeward Islands by Friday.

“With the system still so far out to sea, the track is quite uncertain by the time it has the potential to become a treat to land. It is too soon to determine if there will be any direct impacts in the islands.”

But the NHC said “interests” in the northern Leeward Islands “should ensure they have their hurricane plan in place and monitor the progress of this system”.

OBA: ‘Sad & Disappointed Over What Has Transpired With Renée Ming’