Set just a few hundred yards from the ocean in sun-kissed Venice Beach, Los Angeles, Gold’s was the backdrop for Pumping Iron, the 1977 documentary which followed a young, unknown Austrian bodybuilder called Arnold Schwarzenegger as he prepared for the Mr Universe contest.

The film turned him into an overnight sensation. He would go on to become a global superstar, marry a member of the Kennedy clan, and become Governor of California.

Yet today Gold’s sits amid post-apocalyptic scenes which have consumed much of LA, turning the City of Dreams into an urban nightmare from which people are fleeing in droves.

A makeshift tent city made up of flapping tarpaulins and cardboard boxes surrounds the gym on all sides.

Junkies and the homeless, many of whom are clearly mentally ill, walk the palm-lined streets like zombies – all just three blocks from multi-million-dollar homes overlooking the Pacific.

TV bulletins are filled with horror stories from across the city; of women being attacked during their morning jog or residents returning home to find strangers defecating in their front gardens.

Today, Los Angeles is a city on the brink. ‘For Sale’ signs are seemingly dotted on every suburban street as the middle classes, particularly those with families, flee for the safer suburbs, with many choosing to leave LA altogether.

British-born Danny O’Brien runs Watford Moving & Storage. “There is a mass exodus from Hollywood,” he says.

“And a lot of it is to do with politics.’ His business is booming. “August has already set records and we are only halfway through the month,” he tells me.

“People are getting out in droves. Last week I moved a prominent person in the music industry from a $6.5 million [£5 million] mansion above Sunset Boulevard to Nashville.”

O’Brien, 58, who moved to LA from London 34 years ago, is also planning to move to Tennessee.

“Liberal politics has destroyed this city,” he says. “The homeless encampments are legal and there’s nothing the police can do. White, affluent middle-class folk are getting out. People don’t feel safe any more.”

With movie studios still shuttered because of the coronavirus pandemic and businesses only just starting to remove the wooden boards put up after city-wide rioting following the death of George Floyd while being arrested by three white officers in Minneapolis, LA is now in the grip of white flight.

Lou Ferrigno became friends with Schwarzenegger when both worked out at Gold’s. While he might not be quite a household name like Arnie, Ferrigno starred in the TV series The Incredible Hulk and became one of the wealthiest bodybuilders in the world, with a fortune of $12 million.

President Donald Trump appointed him to his council on fitness, sports and nutrition in 2018.

But Ferrigno, for all his impeccable connections, has become fed up with what he describes as the ‘dramatic decline’ in LA. He and wife Carla recently sold their £3 million home in Santa Monica and moved into a 7,146 sq ft mansion two hours north of LA.

Carla says: ‘One morning around 7am I opened the curtains in our beautiful Santa Monica home and looking up at me from our driveway were three gang members with tattoos on their faces sitting on our retaining wall. They were cat-calling me and being vulgar. I motioned I was going to call the police and they just laughed, flicking their tongues at me and showing me their guns.’

Her husband added: “We put the house up for sale after 40 wonderful years and moved north. We feel lucky to have made it out. Now we are in a wonderful place and very happy.”

Renee Taylor, an Oscar-nominated screenwriter and actress who appeared in the hit TV sitcom The Nanny, recently sold her Beverly Hills home after half a century and moved to the East Coast.

“I feel so sad for my friends left in Beverly Hills who had to suffer through looting and rioting,” she says. “I got out just in time.”

The virus only made matters worse. There are homeless encampments in some of the most instantly recognisable tourist traps.

Stretches of Hollywood Boulevard – embedded with glittering stars representing those who achieved their dream of fame and fortune – resemble a Third World shanty town rather than the heart of America’s second-largest city.

Outside the Chinese Theatre where Marilyn Monroe and other screen icons are immortalised by their handprints in concrete, the Michael Jackson and Superman lookalikes who usually pose with tourists have been replaced by vagrants begging for change.

Hundreds of LA’s homeless are still without protection.
One of the city’s homeless – there are more than 66,000 people sleeping rough every night. The virus only made matters worse. There are homeless encampments in some of the most instantly recognisable tourist traps

Meanwhile, the visitors snap photos of a large Black Lives Matter logo painted down the middle of the street.

Car parks beside the beach in Santa Monica – a popular tourist destination for Britons – are filled with bashed-up motorhomes, each housing several people.

The authorities have even put portable toilets on the streets to try to stop the homeless relieving themselves on private property.

The Westwood area of LA, home to some of the most upmarket blocks of flats in the city, has been renamed ‘West Hood’ by locals appalled by rising crime.

Veteran publicist Ed Lozzi says: ‘The city was changing before coronavirus brought us to our knees. The homeless problem has been escalating for years, exacerbated by weak politicians making bad decisions.

“Hollywood has always been the wokest of the woke, so politicians have done nothing to stop people sleeping on the streets. It’s not illegal and the weather’s nice, so they keep coming.

“There is insufficient housing, inadequate mental health care. Add in Covid and it’s a perfect storm. 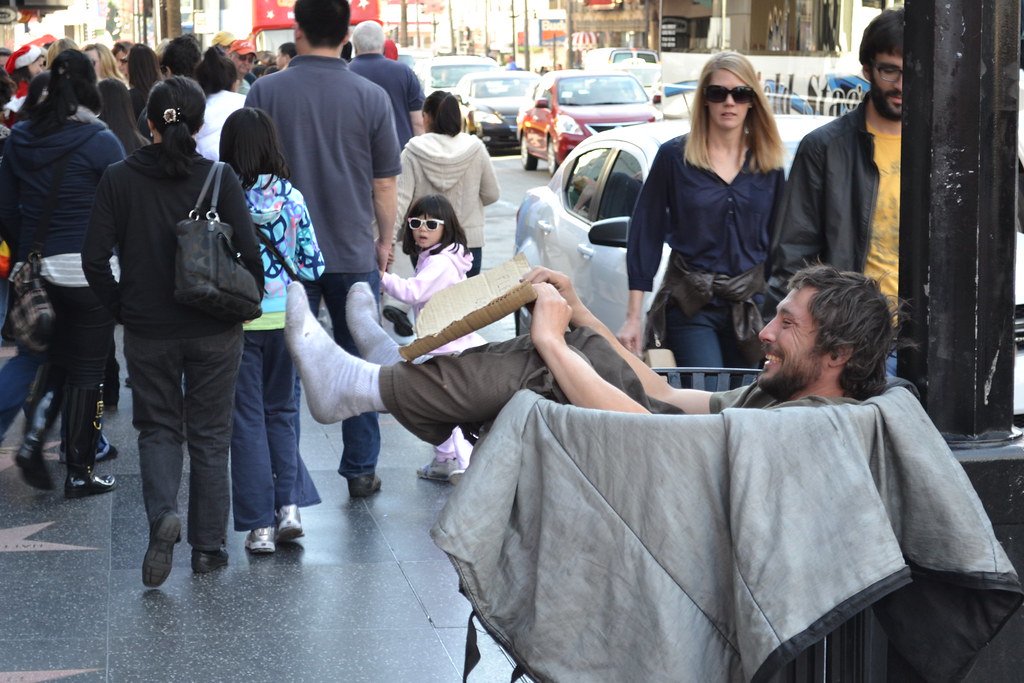 “When I first arrived in LA 40 years ago, the town smelled of orange blossoms. Now the streets stink of urine. There is a beautiful park in Westwood but you can’t go there because there are people slumped on the ground and you step on a carpet of needles.

“White flight is real. The elites and middle classes are leaving. People are taking losses on the sales of their homes to get out.”

The divide between rich and poor has never been more glaring. Just yards away from Gold’s sits the sprawling LA headquarters of internet giant Google.

The car park is housed in a building designed by architect Frank Gehry to look like a giant pair of binoculars. Private security guards wander round as a handful of employees returning after lockdown drive into the complex in their Teslas, Porsches and Range Rovers.

Charity worker Robert (he declined to give his last name) mans two portable toilets opposite the Google HQ. Recently released from jail, this menial job is the only work he can get. He says two people have overdosed in the toilets in the past two weeks.

“I have a Narcan pen which brings them back to life after they overdose on opioids. I’ve had to use the pen twice since the beginning of August.

“The situation is terrible. I don’t blame those who can afford to get out of the city for doing so.”

“There’s no hope any more,’ he continues. ‘The rich are getting richer and there’s nothing for those on Skid Row. Trump has done nothing to help the poor. All he cares about are his rich friends making more money. If I had money I’d get out too.”

The pandemic has made many in Hollywood realise they don’t need to live in LA – or anywhere near it – to keep working. 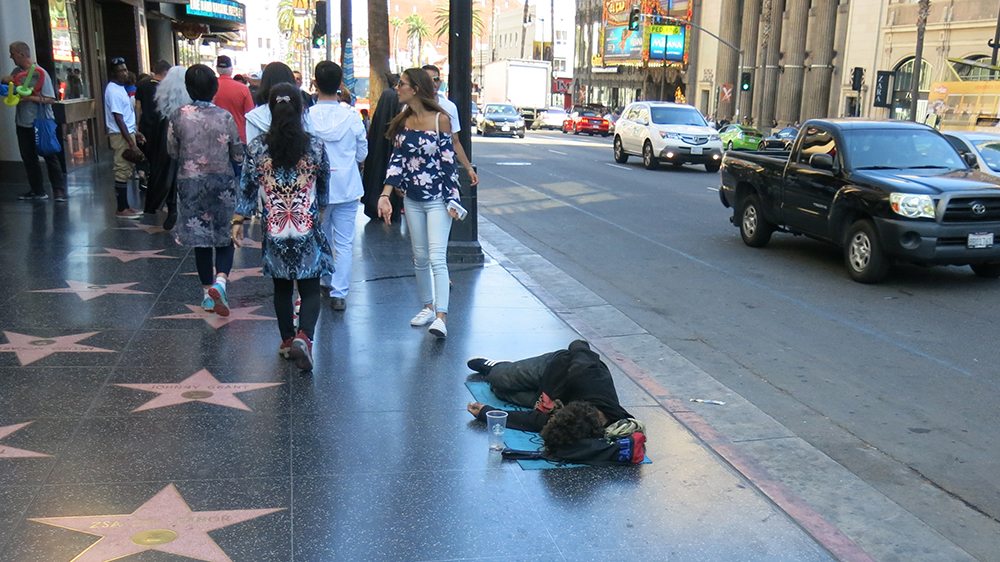 Talent manager Craig Dorfman has moved to upstate New York. ‘A lot of people in the industry are re-evaluating their lives and saying,

“You know, I never really loved LA. Where would I like to live? Because I can do what I want to do from anywhere,” says Dorfman.

Fashion stylist Leah Forester and her film producer husband Bill Johnson have rented out their home and moved to the Mexican beach town of Careyes with their two children.

“We wanted to be in the most healthy, supportive and serene environment we could be in so that we could have some sense of control over our immediate surroundings and our destiny,” says Forester.

“I think it’s not tenable. I don’t think that it’s manageable.”

Ironically, the celebrity enclave of Malibu – home to such leading members of the ‘wokerati’ as Leonardo DiCaprio – has cracked down hard on the homeless, bringing in local laws to prevent people parking their motorhomes along the beach overnight.

‘They’ve kicked the homeless problem into other areas of the city like Westwood and Venice,’ says publicist Ed Lozzi. ‘It’s a classic case of ‘not in my back yard’.’ 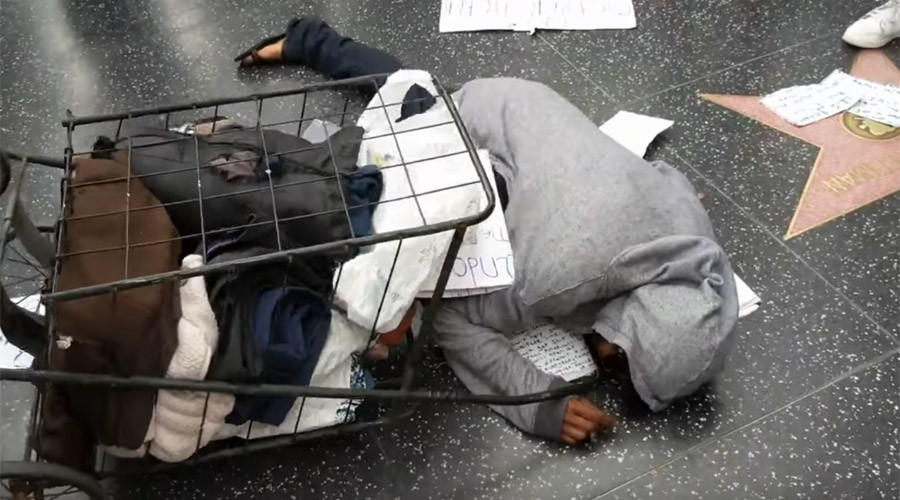 Meanwhile, some of Tinseltown’s biggest stars are developing back-up plans, should the situation worsen. Tom Hanks and Rita Wilson recently took Greek citizenship and have told friends they intend to spend more time in Europe.

Producer Dana Brunetti, business partner of disgraced actor Kevin Spacey and producer of the Fifty Shades Of Grey films, has acquired Italian citizenship “because Italy is part of the EU – it gives me a lot of options if the s*** hits the fan”.

Nicole Kidman and husband Keith Urban have homes in LA, Nashville and her native Australia.

A source says: “They have been spending a lot of time in Nashville. There they can give their kids a more normal upbringing. They have been talking about getting rid of the LA place.”

When the news broke last week that Prince Harry and Meghan have chosen to make their home two hours north of LA in the upmarket hamlet of Montecito, the news shocked no one.

One Oscar-nominated writer told me: ‘They saw enough of LA those times they left Tyler Perry’s house to make them not want to raise Archie in a place like this. LA has always attracted beautiful and talented people from around the world who come here looking for fame or money or both.

“Now the streets look like Haiti after the earthquake. It’s dirty, dangerous and work has dried up. Even when studios start to open up, people will choose to work from other places.”

The most recent high-profile name to quit Hollywood is Tesla billionaire Elon Musk, a darling of the showbusiness crowd. Actor Robert Downey Jr has said it was Musk who inspired his portrayal of Tony Stark, the eccentric billionaire inventor in the Iron Man movies.

Musk has recently sold his compound of four homes in Bel Air for a combined total of $62 million (£47 million) and is said to be considering a move to Texas, where he is building Tesla’s $1 billion new factory.

“When the real-life Iron Man moves out of Hollywood, you know it’s all over,” says a source at one of the major studios.

Premier: ‘Two Families In Bermuda Are Mourning Young Men, Taken From Them So Unexpectedly’