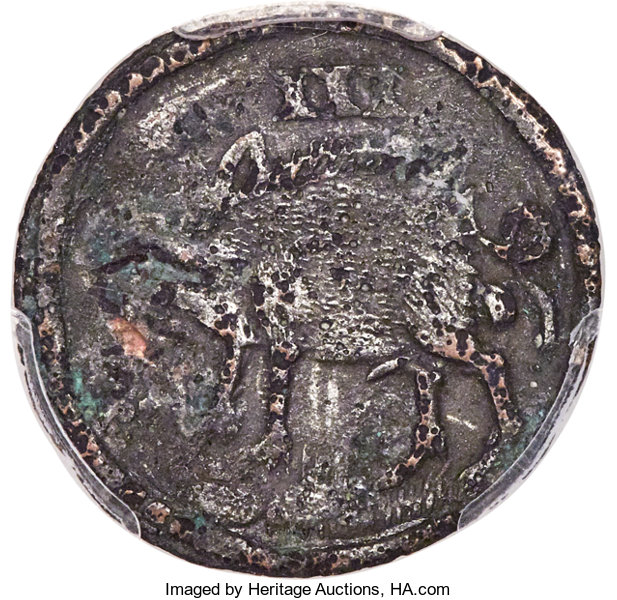 When all was said and done a rare Bermuda ‘Hogge Money coin produced in the early 1600s — sold for $96,000 at an auction last night – the coin is one of only eight examples known to exist.

Produced in England circa 1616, to be used in the British colony of Bermuda, the original ‘Hogge Money’ coins were issued in four denominations – shilling, sixpence, threepence and twopence.

The coins feature a hog and a sailing ship, with the hogs commemorating the wild hogs discovered in Bermuda by shipwrecked English settlers.

Known as the earliest currency in the English-speaking New World colonies, the brass coins are lined with a thin coating of silver.

A statement released by Heritage Auctions said the ‘Hogge Money’ piece had “recently surfaced in Bermuda”.

“The threepence is the rarest of the denominations, with only eight examples known, including the recently discovered coin offered here. Only four of the eight known examples are in private hands, with the other four in institutional collections.”

A spokesman said: “Thanks to modern metal detector finds and excavations”, there are only approximately 40 sixpence coins known to collectors today.

While only four denominations are known to exist — the twopence, threepence, sixpence, and shillings, the spokesman added: “There are rumors of a fourpence groat and a one penny denomination, but no examples of those denominations have ever been confirmed.”