CNN Weather: By Haley Brink & Allison Chinchar – Heat alerts are in place for more than 65 million people from California to Tennessee on Sunday.

More than 65 million people from California to Tennessee are under some type of heat alert Sunday, as dangerously high temperatures persist across the Southwest and the southern and central Plains.

Sunday will be the last day of record heat across the Southwest before a strong cold front is expected to move through the region, cooling temperatures to more seasonal values, as summer officially remains nine days away. 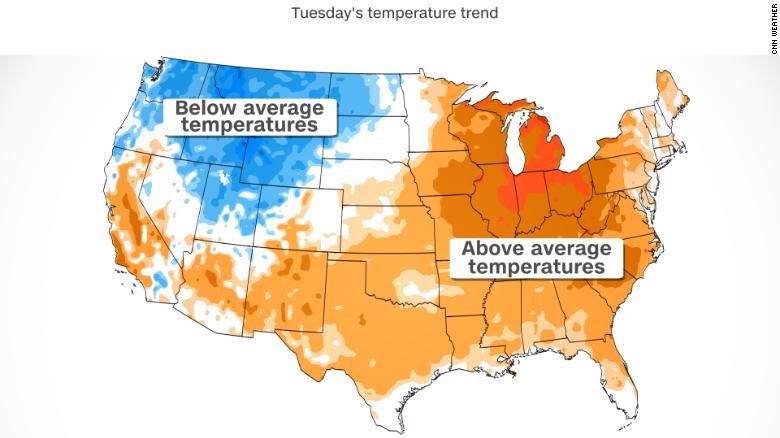 Well-above-normal temperatures will be in place across the Midwest by Tuesday as a dome of heat shifts north and east throughout the week.

But high temperatures across the southern and central Plains will remain in the triple digits, with heat index values (or “feels like” temperatures) approaching 115 degrees Fahrenheit across parts of Texas and Oklahoma Sunday afternoon.

“The combination of hot temperatures and high humidity will combine to create a dangerous situation in which heat illnesses are possible,” the National Weather Service office in Tulsa said.

This heat will continue to build, spreading north and east throughout the early half of the week. Record-breaking heat will spread into the central Plains through the Mississippi River Valley and into the Carolinas Monday, and by Tuesday, the heat will extend from the Midwest to the Carolinas. 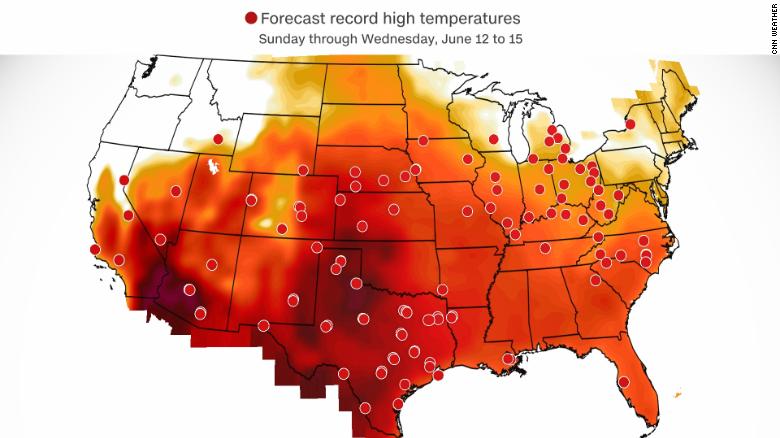 Record heat spans the nation this week as an extreme heat wave tracks north and east.

Several places broke daily high temperature records Saturday, including Death Valley in California, one of the hottest places on Earth. Temperatures there reached 122 degrees Fahrenheit, beating its previous record for June 11 set in 1921, which was 121 degrees.

More than 45 million of those people, or about 15 percent of the population of the lower 48, will experience triple digit temperatures through next week, mostly across the desert Southwest and the southern and central Plains.

Energy experts sound alarm about US electric grid: ‘Not designed to withstand the impacts of climate change’

It means at least 140 cities could set new daily high records Sunday through Wednesday: Most of the record temperatures Monday will stretch between Denver and Raleigh, North Carolina, but could spread as far north as Wisconsin and Michigan by the middle of the week. And Chicago could top out in the upper 90s Tuesday and Wednesday.

And the overnight lows, which usually allow the human body to adequately cool down, could be as unforgiving as the daytime highs.

“Your body requires cooling off at night, and actually expects it while you’re sleeping,” said Jenn Varian, meteorologist at the National Weather Service Las Vegas office.

“When we have very warm overnight temperatures, your body is simply not able to cool off properly, which in itself can cause complications, but will set you up to be less prepared for the daytime heat as well.”