The infestation of bird mites at Harrington Sound Primary School triggered a sit out by teachers this morning.

You may recall the school was shut down last week for a two day clean-up and reopened on Wednesday, amid complaints that the Ministry of Education did not tent the school.

Bermuda Real understands that despite the clean-up, teachers and students were still being bitten by bugs dropping from the ceiling when they returned to class today, which is Sports Day.

They are now waiting to meet with their union leader and Education Commissioner Dr Freddie Evans.

An emergency meeting will be held this evening by the school’s PTA to discuss the ongoing problem.

Last week a PTA spokesperson said they had received more reports of mites due to the infestation caused by birds nesting in the roof after the clean-up.

The emergency meeting is due to take place this evening at the school’s auditorium at 6pm.

After the clean-up last week, Dr Evans said bird nests and dead birds were removed from ceiling spaces on the third floor of the main building. Classrooms were fogged to eliminate any remaining bird mites last Monday.

He also said he would provide an update for the PTA meeting once he received another report from Bermuda Pest Control. 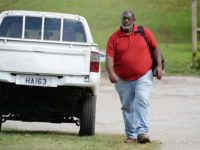