Hank Aaron, who fought vile racial prejudice in his lonely vigil to break Babe Ruth’s all-time major league home run record, and went on to also establish the all-time records for RBI, total bases and extra base hits as one of the greatest hitters in baseball history, died peacefully in his sleep Friday morning. He was 86.

In a 23-year career, mostly with the Milwaukee/Atlanta Braves, Aaron hit .305, with 755 homers, a record that stood until Barry Bonds surpassed it in April 2007 en route to a career total 762.

That’s the listed record, although Bonds’ use of steroids, which led to a phenomenal increase in his home run totals late in his career, served to de-legitimatize his records in the minds of the public, as evidenced by the fact that he still has not been voted into the Hall of Fame.

But there was nothing artificial or illegitimate about Aaron, a lithe six-foot, wrist-hitting slugger whose frame and 175/180-pound playing weight hardly varied as he methodically compiled 20 or more homers in 20 consecutive seasons, and scored 100 or more runs 15 times including a record 13 straight seasons.

In a career that resulted in his first-ballot election to the Hall of Fame in 1982, Aaron led the league in homers, RBI and doubles four times, runs three times and won two batting titles, .328 in 1956 and .355 in 1959. In leading the Braves to the world championship in 1957, Aaron was named National League Most Valuable player, hitting .322 while leading the league with 44 homers and 132 RBI.

A product of Mobile, Ala., Aaron was one of eight children living in a home without electricity or indoor bathrooms. He played only football in high school because they didn’t have a baseball team, and at age 17, signed a $10 per game contract with the local semi-pro team, the Mobile Black Bears. In between playing baseball, he helped the family out in the summers by delivering ice around town — a job he later attributed to helping him develop the strong wrists that became his trademark as a hitter.

Aaron signed his first professional contract at 17 with the Indianapolis Clowns of the Negro Leagues, and was hitting well over .450 for the Clowns in 1952 when major league scouts began flocking around them. Both the Giants and the Braves offered Aaron contracts, but he wound up signing with the Braves when they offered a salary of $100-a-month more. “Imagine” he said years later, “for the difference of $100 a month I could have been in the same outfield with Willie Mays.”

Aaron’s rise to the big leagues was swift. After hitting .336 at Class B Eau Claire and being named All-Star shortstop and Rookie of the Year in the Northern League in 1952, he tore up the Class A Sally League at Jacksonville in 1953, leading the circuit in batting (.362), RBI (125), hits (208) and runs (115), and earning himself an invite to major league spring training camp in 1954. Although Aaron had moved to second base at Jacksonville, the Braves sent him to the Puerto Rican winter league that off-season to learn to play the outfield.

They originally intended for him to start the 1954 season in the outfield for their Triple A team in Toledo. That all changed when Bobby Thomson, their prize trade acquisition from the Giants that winter, broke his ankle sliding into second base in a spring training game and Aaron was suddenly handed the left field job.

Not, however, before he endured his share of racial insults from his new major league teammates and coaches.

Aaron’s, easy, loping style of running the bases and chasing after balls in the outfield prompted Braves manager Charlie Grimm and coaches to jokingly call him “Stepin Fetchit” in reference to the Black film actor of the 1920′s and ’30s whose character, “The Laziest Man in the World” was later condemned as the worst negative stereotype of African Americans. One of Aaron’s teammates, Joe Adcock, a first baseman from Coushatta, La., was fond of calling him “Snowshoes.” And even after he won the MVP award in 1957, Time Magazine did a profile of him entitled: “The Talented Shuffler.”

His rookie season, 1954, Aaron hit .280 with 13 homers and 69 RBI in just 122 games before suffering a broken ankle sliding into third base, Sept. 5. Still, he finished second in the NL Rookie of the Year Award to the St. Louis Cardinals’ Wally Moon.

[More Sports] From Barack Obama to Barry Bonds, the baseball community and beyond mourn the death of Hank Aaron »

But it was long after he’d established himself as one of the premier hitters in the game that Aaron was forced to endure the worst kind of prejudice as he closed in on Ruth’s longstanding lifetime record of 714 home runs. It seemed a lot of white America was not ready for a Black man to hold baseball’s most hallowed record.

In his 1991 memoir, “I Had a Hammer,” Aaron detailed the hundreds of threatening letters, telegrams and death threats he got and how it only served to drive him harder. “In 1972 when people finally realized I was climbing up Ruth’s back, the “Dear N—-r” letters started showing up with alarming regularity,” he said. “They told me no n—–r had any right to go where I was going. There’s no way to measure the effect those letters had on me, but I like to think every one of them added another homerun to my total.” 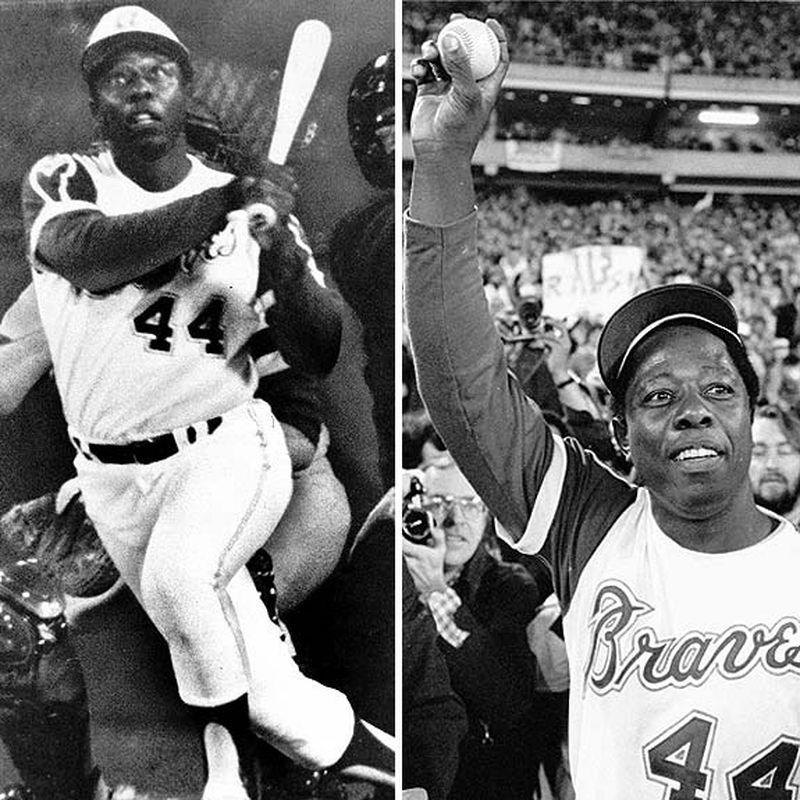 In the end, when he finally surpassed Ruth, hitting No 715, April 8, 1974, off the Los Angeles Dodgers right-hander, Al Downing, at Atlanta’s Fulton County Stadium, a lot of Aaron’s bitterness had shifted to Baseball Commissioner Bowie Kuhn. Aaron began the ’74 season needing only one homer to tie the record, but because the Braves opened the season in Cincinnati, they had wanted him to sit out the three games there so he could break the record at home.

Invoking his “integrity of the game” powers, Kuhn decreed that Aaron had to play at least two of the games in Cincinnati and, sure enough, on Opening Day, he hit a three-run homer in the first inning off the Reds Jack Billingham for No 714. After resting the second game in Cincy, the 40-year-old Aaron went hitless in the series finale and then connected for the two-run, game-tying shot off Downing in the fourth inning of the Braves’ opener in Atlanta the next day, touching off Atlanta broadcaster, Milo Hamilton’s immortal call: “There’s a new home run champion of all time and it’s Henry Aaron!”

“I wish I could have enjoyed it as much as others who broke records,” Aaron said years later in reference to all the hate mail and death threats — and the fact that, after ordering him to play the two games in Cincinnati, Kuhn was not even on hand to see his historic blast in Atlanta. Citing a prior speaking engagement in Cleveland, the commissioner instead sent one of his assistants, Monte Irvin, to represent him in Atlanta.

“The commissioner took the lineup card out of (Braves manager) Eddie Mathews’ hands,” said outraged Braves board chairman Bill Bartholomay. “It was the only time I know of in history where somebody else other than the manager set the team’s lineup.”

A month later, Aaron was asked what he would do if he were ever the commissioner of baseball “If I were commissioner,” he answered, “I would’ve seen Hank Aaron hit his 715th homer.”

Aaron ended the ’74 season with 733 homers and then, with his blessing, the Braves sent him back to Milwaukee to play his final two seasons as a designated hitter in the American League with the Brewers, who were owned by Bud Selig, the future Commissioner of Baseball and a lifelong Aaron fan. So it was that Selig was especially torn when Bonds broke his hero’s record, under his commissionership watch, as baseball was fully embroiled in the steroids scandal. For his part, Aaron stayed clear of the steroids issue, at least as it related to Bonds breaking his record. His friends and teammates, however, spoke for him. In an interview with ESPN’s Howard Bryant in 2009, former Braves outfielder Ralph Garr said: “The one thing Henry hated was cheating. The whole thing bothered him.”

After his retirement, Aaron served in the Braves’ front office for many years as a vice president, and Selig further honored him by creating the Hank Aaron Award for the major leagues’ best hitter, presented annually at the World Series. In a 1992 interview with the Atlanta Journal, Aaron revealed that, all those years later, he still kept all the hate letters from the chase of Ruth’s record. “I’m always going to keep them,” he said. “I don’t care what anybody says. It’s just like telling a Jewish family to forget about the Holocaust. If you’re not part of something, it’s easy to tell somebody to forget about it. I was part of it, and it still humbles me a lot.”