Four men involved in a two-vehicle accident last night were rushed to the hospital’s Emergency Department for treatment, following a collision between a truck and a car.

The accident occurred around 7:50pm on Tuesday, October 17th.

At last check, a police spokesman said: “The car driver and truck driver were said to have less serious injuries while the car’s two passengers sustained injuries that may be more serious.”

Police and first responders were dispatched to the scene on St John’s Road in Pembroke near the junction with Tatems Hill.

“All four individuals are being treated at King Edward VII Memorial Hospital,” he said.

“Traffic was diverted away from the area for approximately three hours while the relevant police personnel processed the scene.”

Meanwhile, inquiries continue and any witnesses are asked to contact police on 295-0011.

Joint Statement By The Bermuda Police Service & The Ministry Of Health 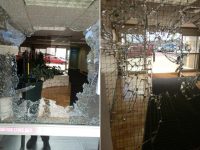