The singer, 74, was travelling from Farnborough Airport in Hampshire on Monday for a gig in New York and was at 10,000ft over Ireland when pilots decided they had to return due to a problem with the plane’s hydraulic systems.

The pilot radioed ahead and requested an emergency landing with fire crews racing to the runway to be on hand.

But as Storm Franklin’s 80mph winds buffeted the airfield the plane was twice forced to abort its emergency landing and go around again, only successfully touching down at the third attempt.

Emergency services surrounded the £66m Bombardier Global Express jet as it came to a halt, with sources telling The Sun Sir Elton was ‘shaken’ by the incident.

One source said: ‘The jet was being buffeted and couldn’t land. It was horrible to see.’

However, Elton later hopped on a plane to the United States to ensure he was in the country in time for his performance at at Madison Square Garden as part of his global Farewell Yellow Brick Road Tour.

The ordeal began soon after the aircraft left Farnborough bound for New York at 10:20am.

An hour into the journey, the jet suffered hydraulic failure and the pilot turned back as they approached the south coast of Ireland. 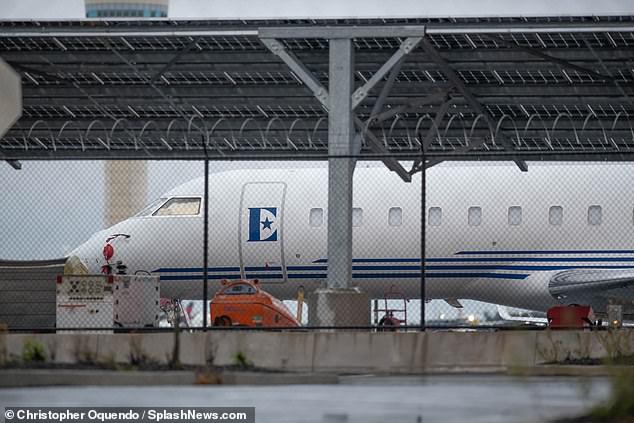 Dramatic: His plane attempted to land twice at Farnborough Airport in Hampshire on Monday when winds hit 80mph during Storm Franklin (pictured in January) 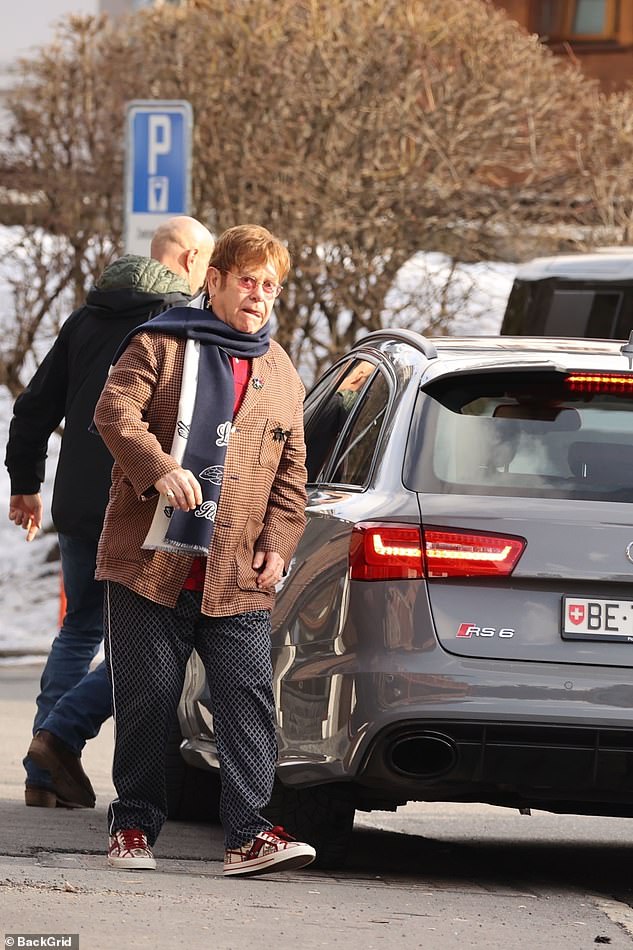 Jet-setter: Elton was pictured over the weekend in Gstaad Switzerland (pictured)

Firefighters from six stations raced to the airport and the runway was cleared.

Plumber Philip Thomson told The Sun: ‘The terrible weather and epic gusts made it almost impossible to land. Two attempts to touch down failed.

‘The plane was being buffeted and couldn’t make it. The aircraft’s nose was far too vertical. The plane was descending and was halfway along the runway when it gave up trying to hit the tarmac. It soared back in the air.

‘A crowd had gathered after word went around that Elton was in difficulty. And as the plane came around again for a second attempt to land, the storm was doing its worst.’

He added that the pilot made two attempts to land but the stormy conditions made it too difficult.

The eyewitness said the plane landed on the third attempt and that he ‘wouldn’t have swapped places with Elton’.

A spokesperson for The Hampshire and Isle of Wight Fire and Rescue Service told MailOnline: ‘Firefighters from Rushmoor, Hartley Wintney, Basingstoke, Fleet, Yateley and Surrey FRS were called at 11:16 yesterday morning to an incident at Farnborough Airport.

‘No action was taken by HIWFRS with the incident dealt with by the airport fire service.’

MailOnline has contacted a representative for Elton for comment.

Elton John was flying from Farnborough Airport in Hampshire to New York on Monday for his Farewell Yellow Brick Road Tour show at Madison Square Garden.

The Bombardier Global Express is a large cabin business jet with a range of 6,000 nmi. that can carry up to 18 passengers.

It first flew on October 13, 1996 and is powered by two BMW/Rolls-Royce BR710s, with the longer range version using the new Rolls-Royce Pearl engines with lower fuel burn.

Despite the turmoil of the morning’s events, Sir Elton still wowed the New York crowd at the famed Madison Square Garden on Tuesday, playing many of his hit songs that have made him a music icon.

He looked to be full of energy when he and his band kicked into the set opener, Bennie And The Jets.

Decked out in a white and black-patterned tuxedo-style outfit and large white-rim glasses, the British star would go on to deliver many of his more recognizable songs including Philadelphia Freedom, I Guess That’s Why They Call It The Blues, Rocket Man, Candle In The Wind and Goodbye Yellow Brick Road.

After the September 2018 kickoff, the Farewell Yellow Brick Road Tour, which is intended to be his final trek around the world, was temporarily postponed due to the COVID-19 pandemic following his show in Sydney, Australia on March 7, 2020. 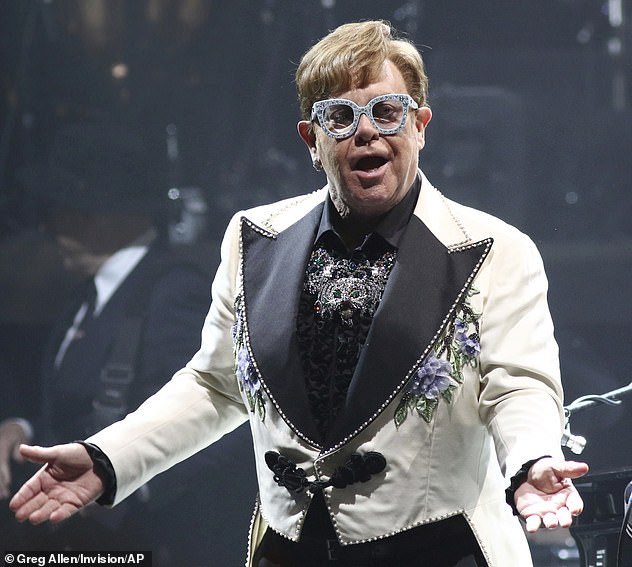 Back on stage: Despite the turmoil of the morning’s events, Sir Elton still wowed the New York crowd at the famed Madison Square Garden on Tuesday 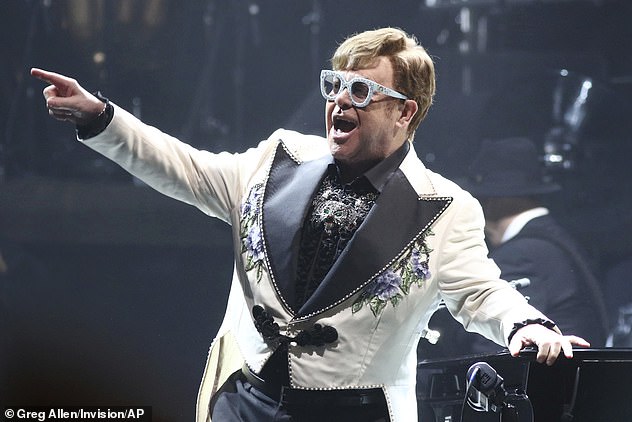 Icon: He looked to be full of energy when he and his band kicked into the set opener, Bennie And The Jets

The nearly two-year break in between shows of the tour was also due to Sir Elton having surgery on his injured hip, that happened when he ‘fell awkwardly on a hard surface.’

Despite intensive physiotherapy and specialist treatment, the pain continued to get worse, making it harder for him to move around, ultimately prompting him to make the decision to push the tour back to 2022.

It comes after the legendary singer was forced to cancel two shows in Dallas, Texas after testing positive for Covid last month.

‘It is with great regret that the Farewell Yellow Brick Road tour dates in Dallas set for Tuesday, January 25 and Wednesday, January 26 must be postponed due to Elton recently testing positive for COVID-19,’ a statement confirmed at the time.

‘Fortunately, Elton is fully vaccinated and boosted, and is experiencing only mild symptoms. Fans should hold on to their tickets as they will be honoured at the rescheduled dates to be announced soon.’ 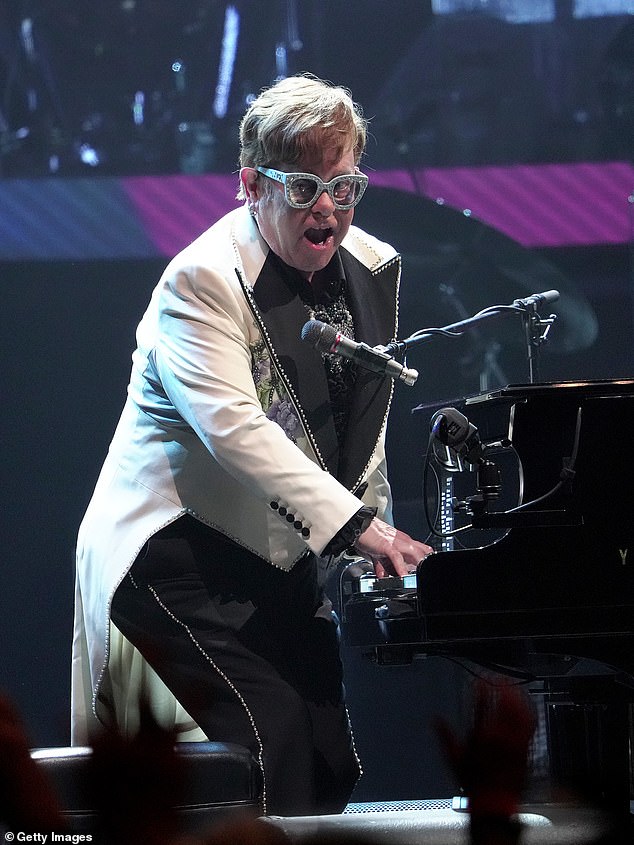 Bevy of hits: The legendary rocker played many of his familiar hit songs decked out in a black and white tuxedo-style ensemble that included matching glasses 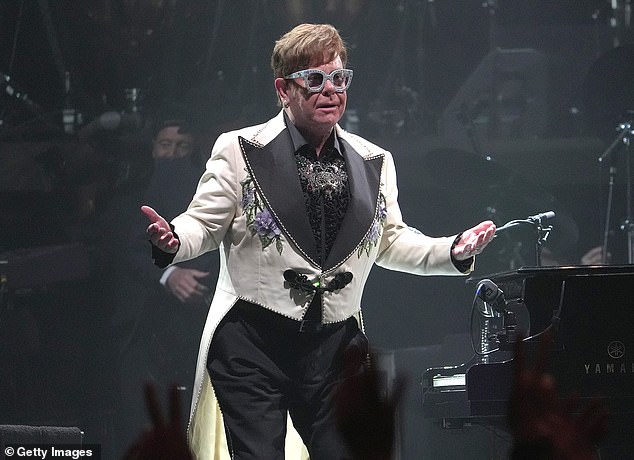 Singing sensation: The British star would go on to deliver many of his more recognizable songs 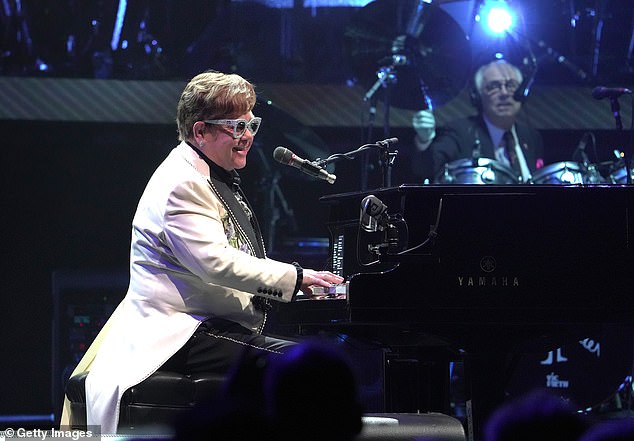 Break: After the September 2018 kickoff, the Farewell Yellow Brick Road Tour, which is intended to be his final trek around the world, was temporarily postponed due to the pandemic

‘Elton and the Farewell Yellow Brick Road tour look forward to returning to the stage shortly.’

The flamboyant British rocker had only just resumed his Farewell Yellow Brick Road tour on January 20, when he returned to the stage in New Orleans after a nearly two-year hiatus.

‘Wow, we haven’t played a show since the 6th of March 2020. This is a new experience for us, I’ve never had this amount of time off in my life … playing music, well at least since I was 17 years of age,’ he told the crowd at that concert.

‘I have a fact for you, you have been holding on to these tickets for 745 days. And I can’t thank you enough for being so patient. We live in funny times but we’re gonna have a great time.

Elton kept busy during the pandemic, releasing a collaboration album aptly-titled The Lockdown Sessions, which he made during the first COVID-19 lockdown.

Marking his retirement from performing on the road, the star’s global tour began in September 2018.

Like other musicians he was forced to postpone live shows due to the COVID-19 pandemic.

His Farewell Yellow Brick Road tour had first been postponed back in March 2020.

He announced at the time that he would be postponing 19 dates as the pandemic began.

At the time, he told fans: ‘The health of my fans is of the upmost importance to me, so I have made the decision to reschedule my upcoming #EltonFarewellTour shows between March 26th – May 2nd.’

Adding: ‘Unfortunately, as all of you know, there has been this awful pandemic…which is extremely worrying and extremely dangerous if we don’t take precautions.’

‘I would encourage you to stay at home, do what everyone tells you to do, take precautions, because I want you to be as safe as possible.’

He finished his statement by saying ‘when it is safe and when we can all enjoy ourselves together in the best possible circumstances’.

He had been expected to tour across North America until April.

The tour is scheduled to take him to Europe and back to North America before playing in Australia and New Zealand next year.

The Rocket Man star is expected to wrap up the tour in Europe in 2023. 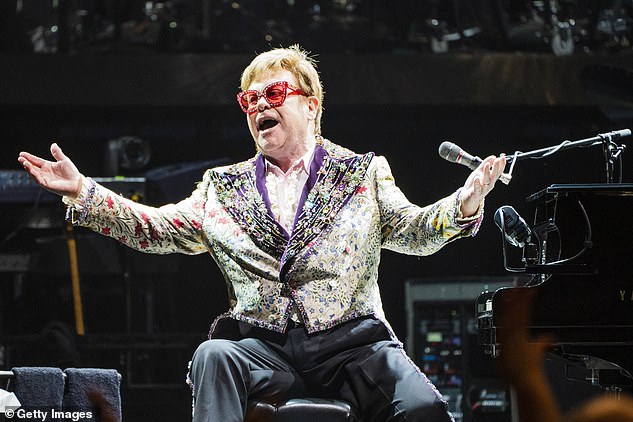 His return to the road means he will miss his own Oscars bash this year due to a scheduling clash, with husband David Furnish, 59, taking over.

The singer has hosted an annual Hollywood party on Academy Awards night for the past 30 years, in order to raise money for his AIDS Foundation, but he will be absent this year.

The Oscars have been postponed from February to March 27 when Elton is back on his Farewell Yellow Brick Road tour and he reportedly didn’t want to disappoint fans after the tour was previously postponed due to the COVID-19 pandemic.

A source told The Sun: ‘Elton is absolutely gutted he can’t make the party but it was completely out of his hands.

‘When his Farewell Yellow Brick Road tour was rescheduled, he kept the first Oscars date free. But when the ceremony was then moved, everything was already set in stone.’

The source added:  ‘It was completely unavoidable. Elton didn’t want to let down those thousands of fans who’d held on to their tickets for his gig in Nebraska and waited so patiently for the tour to be rescheduled after COVID.’

Rapper A$AP Rocky charged with felony assault with a firearm