Minister of Education and Workforce Development Diallo Rabain was invited to judge a student debate on the question ‘Should Bermuda Do Away With The Middle School System?’ as part of the Bermuda College freshman English class.

Students where required to research a topic and then present their findings in a debate format. 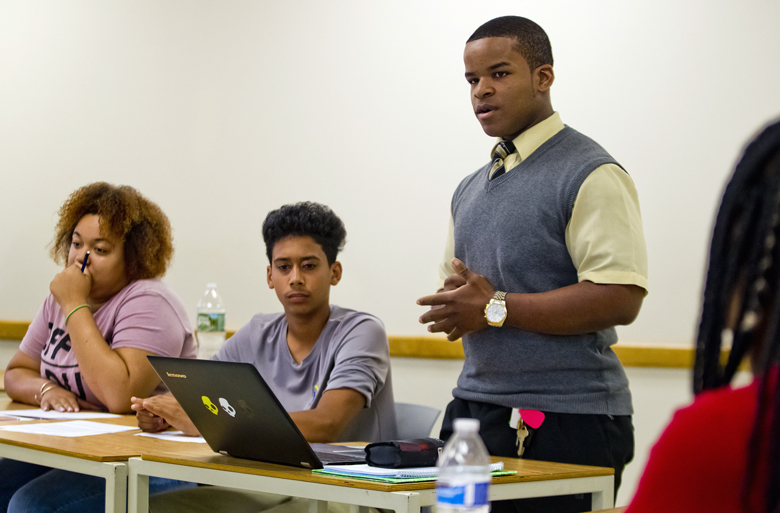 The Minister, who was joined by class instructor, Denise Simons, noted that the most consistent theme, that was also well-supported, was that “middle school allows students time to develop”.

“Both the proposition and opposition sides made thoughtful and compelling arguments,” said Mr Rabain.

“The side of the proposition, made a passionate and researched-based case against middle schools, referencing the 2007 Bermuda Review of Education (Hopkins Report) and an opinion editorial written by the late Larry Burchall.

“The side of the opposition, who supported middle schools made persuasive arguments and held a strong position. I appreciated their discourse on this important educational issue for Bermuda.”

Ultimately, the side supporting middle schools won out, as they provided strong supporting arguments for their position.

Debater Joi Dyer-Richards argued that the Middle School system “isn’t perfect”. But she said “it’s not quite broken” either.

“You can relate the purpose of middle school with the role that mangroves play in relation with juvenile fish,” she said.

“Mangroves provide an environment in which they [fish] can grow in a safe environment until they are ready to make their way into the big sea.”

The Minister noted: “Both the proposition and opposition sides made thoughtful and compelling arguments.

New Mural Unveiled in City of Hamilton on Church Street