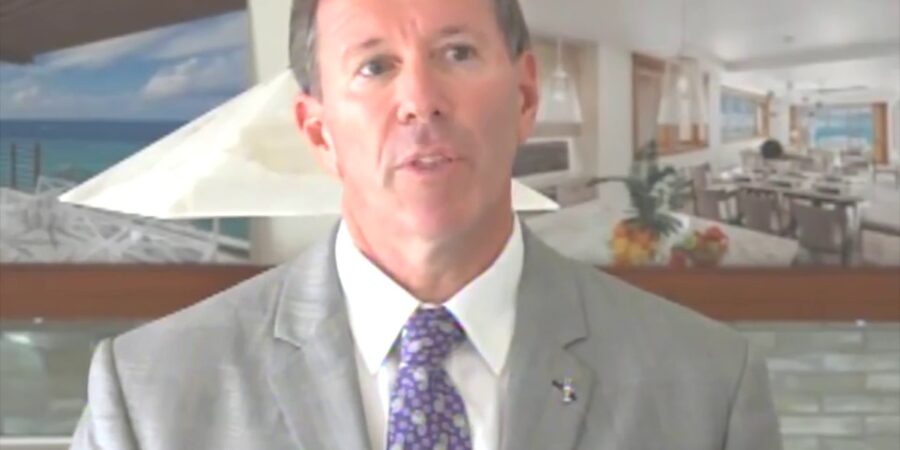 As a member of this country’s Black community, this reporter was like: “What it wasn’t a problem until after the One Bermuda Alliance lost the Government!”

Having worked for the daily I know that reporters don’t write the headlines – that’s the job of the sub-editors or the editor. But most people generally don’t know that. So they were left with all sorts of inferences – none of them good from the Black perspective.

For weeks it nagged at me. Frankly it was irritating because Black Bermudians know the racial divide has been the “big issue in the room” ever since Black people have lived in that Bermuda room! And Michael Dunkley, the former Premier knows that! Bermuda Real asked him for an interview on Sunday. The first question was what’s up with that headline?

When asked if he felt it came across like racism was only an issue after the election, he replied: “Yes it did but in short, that was simply poor reporting.

“Unfortunately, in any society throughout the world, as we have seen recently in Charlottesville, Barcelona, Boston or home here in Bermuda, there are people who hate or create division. Sadly, it pulls our society further apart and, even with all the work we’ve done collectively in the past, we have to work harder to move this country forward together.

“There is still a lot of work to be done and we must all endeavour to treat people how we would like to be treated. We must do unto others as we would have them do to ourselves. There’s too much hatred and too often exchanges get too personal and it creates divides that as a country we have to heal,” he added.

On dealing with the racial divide when the OBA held the government, he said: “It was always important while we were in power, we had countless major challenges that we had to face and we had much success. But we had those that didn’t support the direction that we had to go and that made it difficult.

“I have always tried to lead by example, be accessible, respectful and tolerant and that will never change.”

Asked if he felt that the OBA could have done a better job of dealing with the racial divide while in power, Mr Dunkley said: “Hindsight is always 20/20 and I’ve reflected on it a great deal since the election.

“I am extremely disappointed in the result but always respect democracy. Yes, there was always more we could have done but it was not due to a lack of effort. I believe that history will show we made significant progress and turned Bermuda around, made it a better place, and I look forward to that progress continuing.

“There is still much work to be done. I always endeavour not to be negative, personal, or divisive in my approach. We have too many people who do that and we must strive to be understanding, tolerant and respectful.”

Asked how does it feel to go from the head of the OBA to the backbench, where he will sit all by himself, Mr Dunkley replied: “The people spoke and I will always respect democracy. I have learned a lot and have a great deal of experience on both sides of the political fence which I will use for a better Bermuda. In doing so, I will try to always lead by example and not be divisive.”

But he specifically asked OBA leader Patricia Gordon-Pamplin not to give him a shadow portfolio, for “two main reasons”. “One – with my experience and political background I am capable of speaking on any issue and do not require a shadow portfolio to speak on an issue. I will support our team at all times and I will help nurture our newer members as I have always done. Secondly, I felt it was important to allow our colleagues the opportunity to have a shadow portfolio. If I had one it could take that opportunity away from a colleague.”

Despite the OBA’S 24 to 12 loss at the polls, the former Premier said his days in Bermuda politics are far from over.

“I was re-elected to serve and it is an honour. I will continue serving and I will support the government where appropriate, provide advice if requested and hold them to account when necessary.

“When we were the government the opposition continually opposed just about everything. The people want an opposition that holds the government to account, but people are also tired of the continuing bickering between politicians. If we keep opposing just to oppose our progress forward together will be much slower and people will continue to struggle. We must work to change this,” said Mr Dunkley.

“I believe I am the only MP to win in three separate constituencies, originally in the constituency in which I live, then in C11 and finally in C10. This was not by chance but by choice, as I always wished to broaden my ability to represent people and do whatever I could to help Bermuda.”

Asked whether he is back on the job at Dunkley’s Dairy full-time, he chuckled, and said that entails working 80 hours a week.

“I worked 24/7 as Premier and have always been used to total devotion to a responsibility. Now I am honoured to serve Smith’s North and Bermuda as an MP bringing all my experience, energy, commitment and integrity to help our beautiful island and people,” said Mr Dunkley.

“I will also have time for business interests and am contemplating a foundation to help Bermuda and will make an announcement in due course.”