At least three staff members at the Brown-Darrell Clinic will lose their jobs at the end of this month, as a direct result of “severe reductions in payments” implemented by the Bermuda Health Council.

In a statement released on Friday, Clinic Owner and former Premier, Dr Ewart Brown placed the blame solely at the feet of the Government council.

When contacted by Bermuda Real this weekend, Dr Brown stated outright that “it is a political problem that has to have a political solution”.

He confirmed that he spoke with the Premier David Burt and the Minister of Health Kim Wilson, just prior to the General Election that resulted in the change in government.

When asked what that means moving forward, he said that he was hopeful the new administration “will reconsider this glaring case of victimisation and fix it as only they can”.

But as it stands now, the planned shut down of the CT service at the Brown-Darrell Clinic on January 31st, ultimately means that form of diagnostic imaging will only be available in Bermuda at King Edward VII Memorial Hospital.

“The reduction in healthcare costs is something that I have supported for a decade or more. What I do not support is the idea of targeting any specific practice,” said Dr Brown.

“In 2013, the Permanent Secretary of Health, Jennifer Attride-Stirling warned me that we were going to be targeted and I asked why If you want to lower costs across the board.

“And I remember telling her that I was not a mango and that it was very unfair to focus on us as opposed to applying cuts to the entire system that would drive people out of business.

“This all started with Trevor Moniz when he was the Minister of Health – Grant Gibbons and Trevor Moniz, assisted by the Permanent Secretary and executed by the Bermuda Health Council’s Tawana Wedderburn,” said Dr Brown.

“This is all part of the saga involving me and for some people in Bermuda it is wrong for me to be successful.”

He noted that the current government administration was able to help shortly after securing the Government on July 18th.

Moving forward he said: “I trust that the Government will reconsider this glaring act of victimisation and fix it as only they can.

“The Government did help me, the Premier helped us out to the tune of half of what we have lost and that is deeply appreciated – it’s good but it’s not sufficient,” he said. 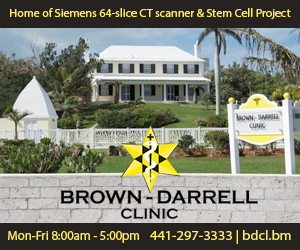 But he said: “I wanted them to repeal the law.” To date, that has not happened. And on that note he said: “It appears that the Bermuda Health Council and Civil Servants have convinced them that health premiums would rise.

“The Health Minister and the Premier assured me that the problem would be fixed early in the new government’s term. And I don’t say that to say that I am not grateful for the help so far.

“We’re not ungrateful but it leaves a bad taste knowing this will affect three people who work at the Brown-Darrell Clinic – one in particular, has been with us for 15 years,” he said.

The bottom line in his view: “It’s a political problem that has to have a political solution, and I’m hoping that this happens.”

In the interim he said: “We never anticipated that we would be put out of business by a government agency. Few businesses could survive up to 87 percent cuts in revenue with only two weeks’ notice.

“No local or exempt company has ever been treated so harshly. The CT scanning service will close at the end of the month on January 31st. ”

He also noted that the CT  unit at the Brown-Darrell Clinic “has provided back-up CT services” to the hospital for ten years, “as well as a private option for patients who require a scan”.

“We have also been at the industry forefront in providing highly specialised physcian reports and in reducing turnaround time,” he added.

Meanwhile, in a statement issued by the Bermuda Health Council (BHC) on Friday, the BHC said it was “incorrect” for Dr Brown to suggest it had been targeted.

The BHC maintained that its recommendations were based on “a form of price control” for diagnostic imaging that had been under review, to keep services affordable. This after “considerable and lengthy consultation and discussion with stakeholders since 2013”.

The process of implementation started in 2015 with ultrasound and X-rays, and moved on to MRI and CT scans services in 2017. The BHC also noted that the same approach was adopted for all service providers.