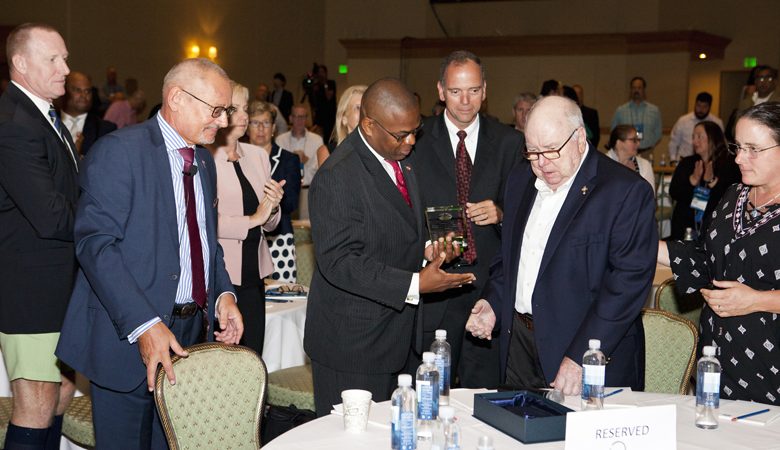 Deputy Premier and Minister of Transport and Regulatory Affairs, Walter Roban opened the Bermuda Captive Conference at the Fairmont Southampton Resort on Tuesday.

He participated in an honours ceremony that recognized eleven corporations who have held a captive insurance company in Bermuda for more than a quarter of a century.

They join an additional 200 such companies who had already been elevated to Bermuda’s Captive Hall of Fame.

Mr Hall was a prime mover in establishing Bermuda as the global leader in captive insurance.

The Fred Reiss Lifetime Achievement Award was first launched back in 2016. It’s named in honour of a pioneering Ohio engineer who conceived of the idea of “self-insurance”.

Bermuda Captive Conference Chairman Mike Parrish, noted that Mr Hall’s son, Jonathan, is now CFO at Hamilton Group, who will be the keynote speaker Wednesday morning at 10:30.
He also noted that the award was created to “celebrate the collaboration of outstanding captive insurance industry professionals”.
“The inaugural winner in 2016 was Jill Husbands, the former chairman and managing director of Marsh IAS Management Services (Bermuda). Last year’s awardee was leading Bermudian corporate lawyer Michael Burns,” said Mr Parrish.
“And we’re very proud to present the third Fred Reiss Lifetime Achievement Award to Brian Hall. Brian is probably well known to many of you for his notable insurance career spanning more than four decades on the island.
“Brian is a true pioneer in our captive industry. His contributions to both insurance and educational organisations in Bermuda have demonstrated his long and sincere commitment to the island—and to generations of Bermudians who have followed him into the industry. Indeed, much of the success we enjoy as a sector today can be attributed to Bermuda-based entities he led and inspired,” he added.
“We are proud to welcome Brian back to Bermuda this week to attend our conference.” 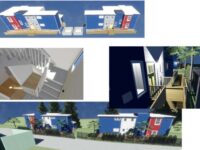 DPT Announces Another 48 Bus Cancellations, Including Bus Runs From Both Senior Schools