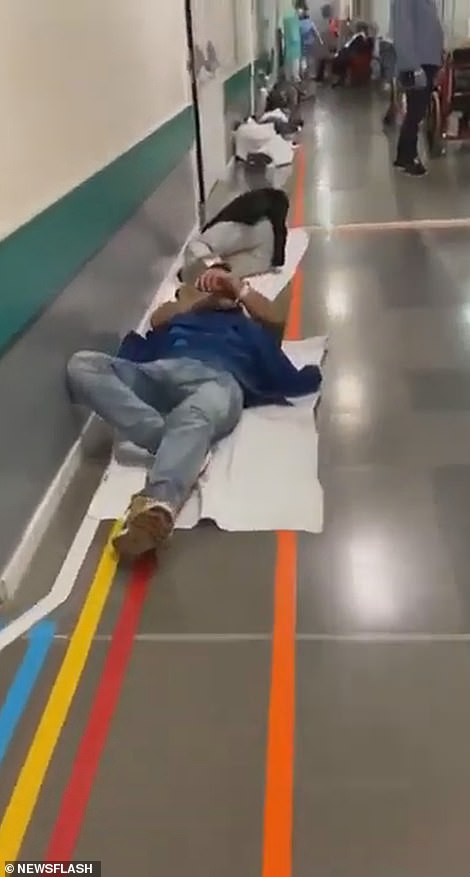 Terrifying footage from inside a Spanish hospital emerged today that shows couging coronavirus patients lying on the floor of a corridor as they wait to be seen by medical staff.

Mail Online reports: “The shocking clip shows some coughing deeply as a medic stands nearby and some of those on the floor appear to be hooked up to oxygen tanks.

“The scenes were recorded at the Infanta Leonor Hospital and the Severo Ochoa de Leganes Hospital in the Spanish capital Madrid, according to El Mundo.

“The video which was reported locally was shared online to urge people to follow social distancing measures being enforced in countries across the world.

“Madrid has recorded 58 percent of the country’s deaths and the crisis has brought the healthcare system to the brink of collapse,” the report said.

“The country is in danger of becoming the new epicentre of the outbreak in Europe, with Italy’s latest figures offering some hope that the crisis there could start to ease.

“Spain’s deputy prime minister Carmen Calvo is among those awaiting urgent test results today after he was taken to hospital with a respiratory infection on Sunday.

“Patients were lying on the floor of a corridor in this hospital in Madrid, with Spain’s death toll from the coronavirus outbreak surging by 462 to pass 2,000 today

“In the first clip in Spain, reportedly recorded at the Infanta Leonor Hospital, patients can be seen lying on the floors of the corridors with face masks on and bedsheets below them.

“People can be heard coughing in the packed corridor as other patients sit on the rows of chairs.

“A second clip shows a health worker walking through the packed corridors of the Severo Ochoa de Leganes Hospital, with patients lining the corridors on gurneys, with many heard coughing too.”

A local newspaper El Mundo report the second hospital confirmed they “are not admitting more patients’ as they are at ‘maximum capacity”. 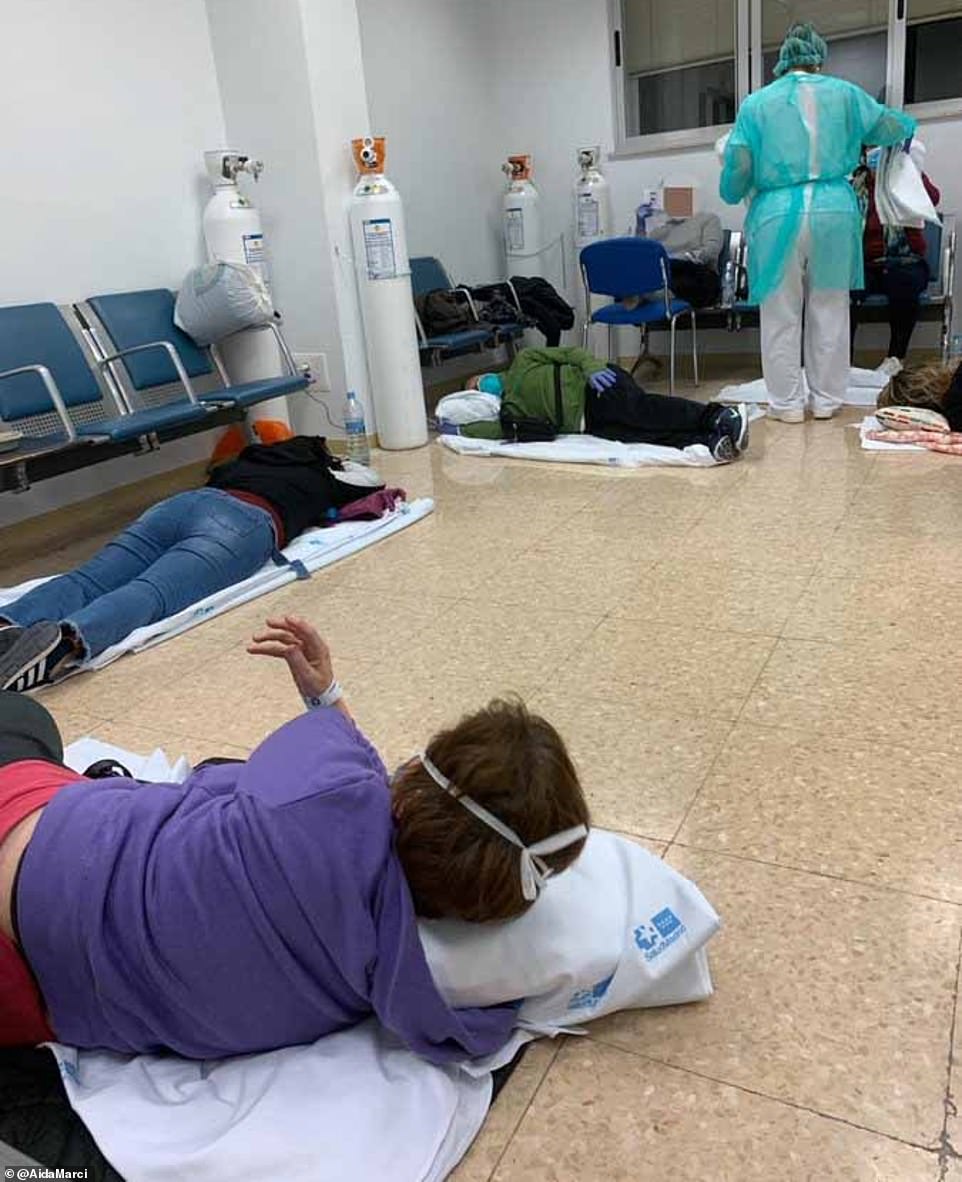 “The newspaper report representative for the General Union of Workers Javier Garcia said the situation at the hospital is ‘dramatic’ with the emergency ward ‘at three times its capacity’ and ‘people without a bed, sitting on plastic chairs for more than 30 hours’.”

Garcia added: “This morning I saw a person on the floor between two seats. Emotionally, this is terrible.”

“Mercedes, a representative for the Workers’ Commissions union, said that on Friday morning there had been 240 people in the hospital’s emergency ward when the capacity is 80 patients,” the report added.

“Jorge Mora, a representative of the healthcare union SATSE said that Infanta Leonor hospital seen in the first clip is ‘at maximum capacity’ too with more than 500 patients admitted for COVID 19, with 300 confirmed and 230 under observation.

“The hospital has reportedly begun to move patients with ‘critical criteria’ to the Colon Hotel where a medical space has been created to relieve hospitals of numbers.

“Madrid is the worst-hit area of Spain. It has registered 10,575 cases, and 1,263 people have died – accounting for 58 per cent of the national death toll.

“Some 3,910 healthcare workers have tested positive for the virus, or around 12 per cent of those infected, the health ministry’s emergencies coordinator Fernando Simon said.

“Officials have repeatedly warned that the number of deaths and infections would continue to rise this week as Spain expands its testing capabilities and that the worst was yet to come.

“The scenes were reportedly recorded at the Infanta Leonor Hospital and the Severo Ochoa de Leganes Hospital in the Spanish capital Madrid and show patients lying on the floor coughing.
“Madrid has also converted a major conference centre named IFEMA into a temporary hospital to deal with the wave of patients flooding the healthcare system. 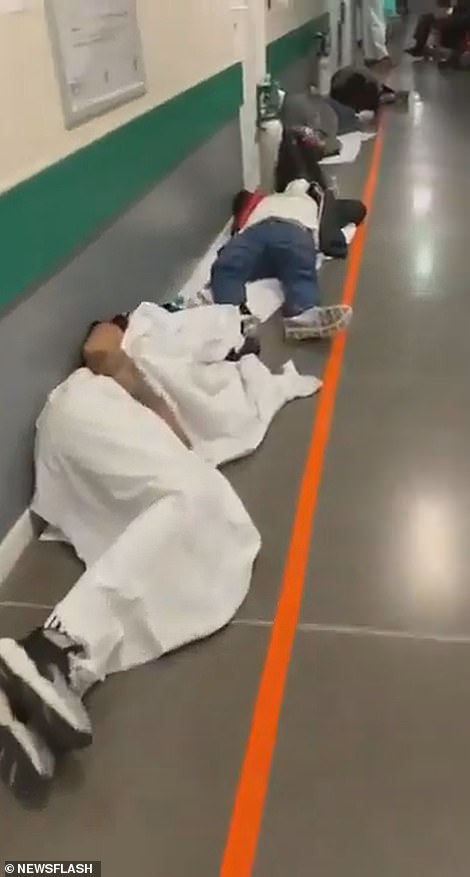 “Soldiers helped move 200 patients just before midnight from area hospitals to the sprawling IFEMA conference centre where 1,300 hospital beds have so far been set up, the regional government of Madrid said in a statement.

“The field hospital will have 5,500 beds once it is fully sent up, including 500 in an intensive care unit.

Spain’s 17 regions manage health care but, under the state of emergency, the government is centralizing all decisions, prompting some such as Madrid to suggest that the government is slowing down the arrival of equipment from abroad.

Sanchez held on Sunday a video call with all the regional leaders but that did not prevent some regions, such as Catalonia and Murcia, from insisting later in demanding a total shutdown of all economic activity except essential services.

Murcia’s government even issued an order in that regard, which was later rebuffed by Spain’s Health Ministry, arguing it was the only authorised to take such a decision.

“Meanwhile, the government of the Canary Islands is calling for ‘zero tourism’ in Tenerife and other islands which include Lanzarote and Gran Canaria, with aound 20,000 holidaymakers still waiting to be repatriated.

“Regional president Ángel Víctor Torres says many holidaymakers still have no flights and has called for more planes in order to get them home.

“Welcoming the call for a longer state of emergency, he said there should be no tourists at all on the islands because of the coronavirus crisis and the closure of hotels and apartment accommodation by this Thursday.

“There were originally about 80,000 tourists on the islands prior to the ‘go home’ alert. The remaining holidaymakers come from the United Kingdom, Ireland, Germany, Austria, Switzerland, Italy, Norway, Sweden, Belgium, the Netherlands, France and Poland.

“Alert messages have been posted on social network sites in eight different languages.”