After months of excavation to make way for Bermuda’s new multi-million dollar new airport, concrete has been poured for the first new taxiway at LF Wade International Airport in 15 years.

According to Aecon’s Executive Director, Frank Ross: “The concrete pour signifies the start of the next phase of the airport development.

“Our team has worked diligently over the past few months to prepare the surface for the concrete and are working through the night to create this new taxiway,” said Mr Ross.

“We are excited to be on schedule and look forward to delivering a world-class airport for Bermuda.” 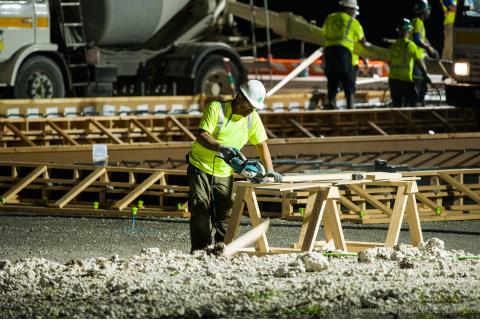 In a statement released this morning by Bermuda Skyport Corporation Limited, a spokeswoman said the concrete for Taxiway W, which will replace the existing Taxiway S, was poured on Tuesday evening. Construction crews will pour about 80 cubic metres per night until the project is completed. The work will be carried out at night to minimise impact to aircraft arrivals and departures.

The new taxiway project, which started on June 7th, is scheduled to be completed by mid-September. Once completed, Taxiway S will be closed permanently.

The statement also noted that the airport redevelopment project is being implemented under a government-to-government framework agreement between the governments of Canada and Bermuda.

The construction phase of the Airport Redevelopment Project is expected to take 40 months and is due to be completed by the summer of 2020.