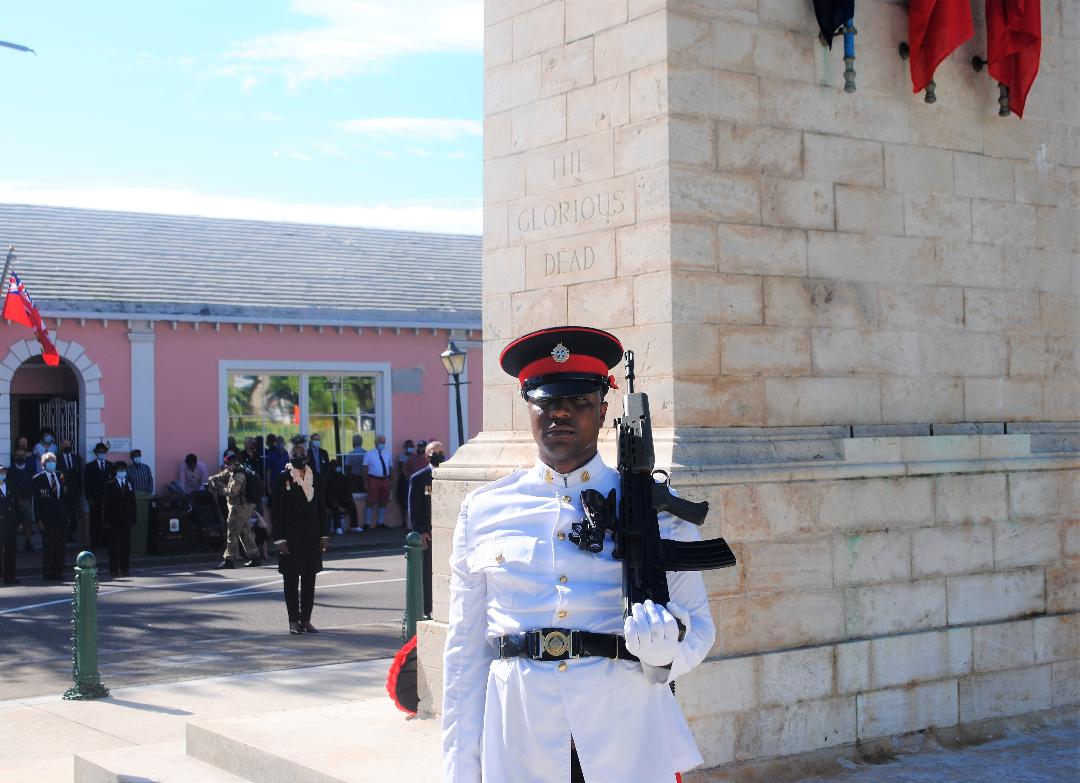 News Release: HAMILTON, Bermuda – The traditional Remembrance Day service at the Cenotaph went ahead – despite the COVID-19 pandemic.

The commemoration was scaled down as a precaution against the coronavirus, but the Royal Bermuda Regiment’s modern soldiers were still on parade to honour the memory of their predecessors.
The RBR supplied a catafalque party – a four-strong guard around the Cenotaph – and the Band & Corps of Drums performed from seats in the grounds of Cabinet Office on Front Street, Hamilton.
Private Co-shae Bartrum, 30, one of the guard detachment, said afterwards: “Out of all the parades, I’ve done, this one made me the most nervous.
“There weren’t many of us, so everybody notices you, but I didn’t make any mistakes.”
The qualified chef, from Sandys, added: “It was important that we were there. I’m glad the ceremony went ahead and wasn’t cancelled altogether.”
Pte Bartrum added: “It was also very hot – the sweat was dripping off my eyebrows.” 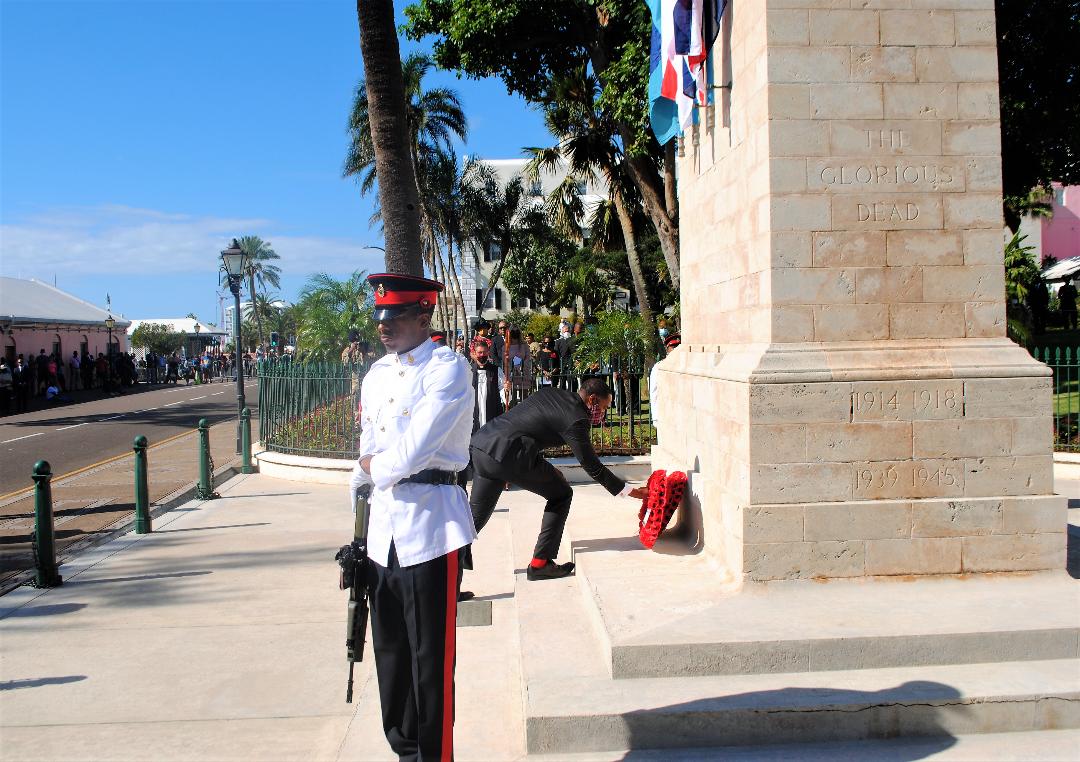 Lance Corporal Rory Dublin, 25, a mechanic from Hamilton Parish, said: “It was a little stressful – but I was proud to be able to do it.
“You have to stand very still for quite long periods, which isn’t easy and I’m proud of all of us.”
Governor John Rankin, Premier David Burt, Opposition leader Cole Simons and representatives of the uniformed organisations, as well as veterans’ groups, laid wreaths and Bishop Nicholas Dill, the Anglican Bishop of Bermuda, led the prayers.
Mr Rankin said: “We must never forget all those in Bermuda who 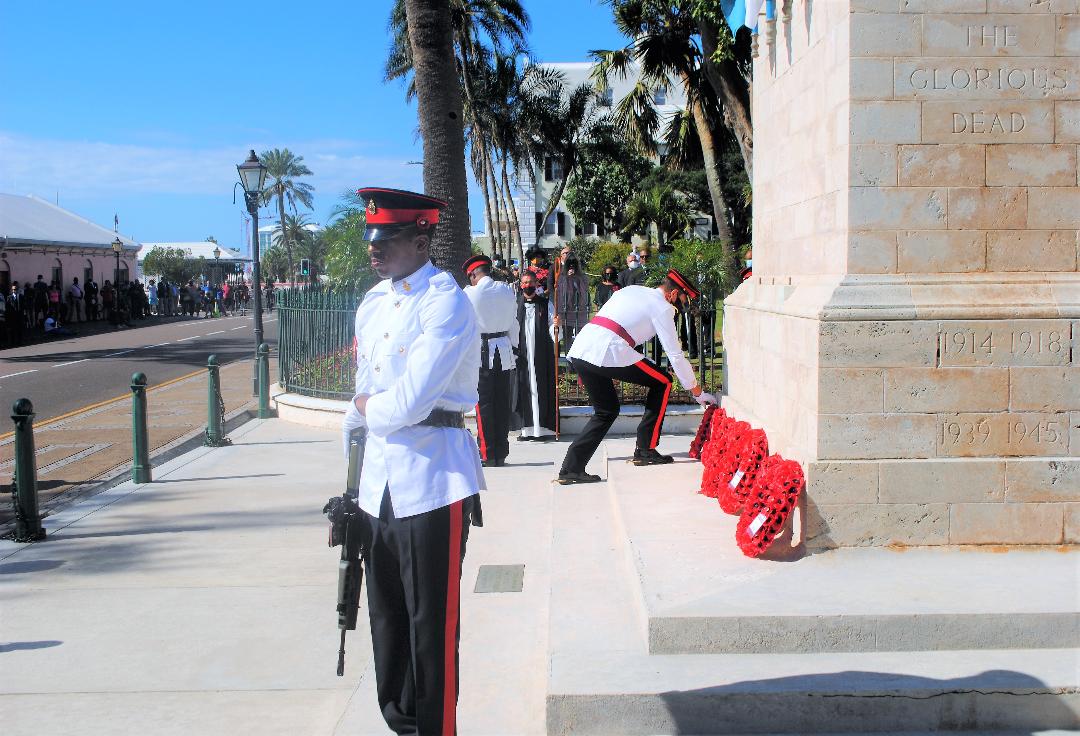 have served in time of war, helping to preserve the freedoms of the people of this island.
“As in previous years, and despite the challenges of COVID-19, I was honoured to be able to lay wreath in tribute to all of our war veterans past and present, including those who made the ultimate sacrifice. We will remember them.”
RBR Commanding Officer Lieutenant Colonel Ben Beasley added: “This is always a solemn event and we must always remember to mark those who sacrificed so much.
“As the Bishop said, those who continue to serve and protect our 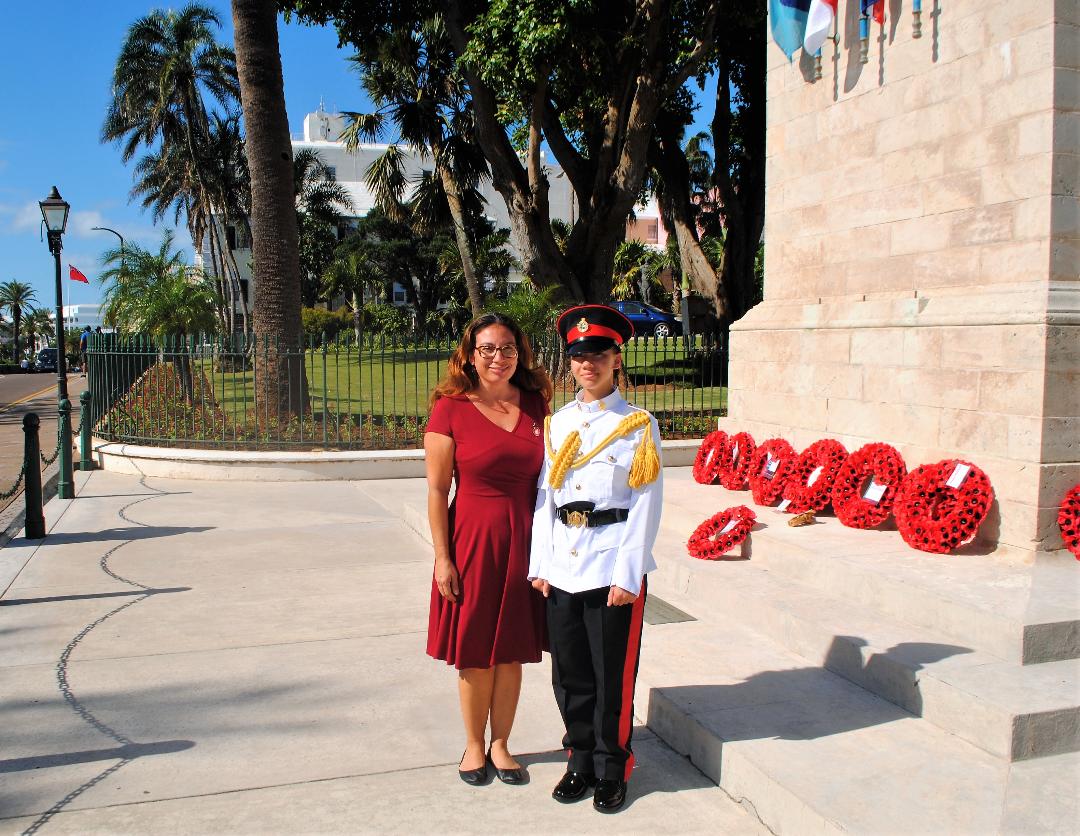 hard-won freedoms also sacrifice something for their country.”
Lt Col Beasley said: “It was situation normal, except for the marching component and everyone involved showed reverence for the event. Given the situation, it was as fitting a ceremony as was possible.
“It’s important we never forget, especially on this 100th anniversary of Remembrance Day, the contribution Bermuda made in two World Wars.”
Dieter and Shirley Friehe paid their respects at the Cenotaph after the official ceremony had concluded.
Ms Friehe, 77, a Bermudian who has spent much of her life in Canada, said she and her German-born husband were impressed by the ceremony.
She added: “My grandfather was in the First World War, so it’s very important to me. It was disappointing not seeing the old times, but it’s not a good time for the world at the moment.
“But it’s great that we were still able to have some sort of ceremony.”
Junior Musician Gabriella Ratteray, at 15 one of the youngest members of the Band & Corps of Drums, said: “I was a little bit nervous, but I enjoyed it. It’s important we have ceremonies like this.”
The Somerset youngster was watched from a safe distance by mother Loida, who said that the RBR was a family affair as her Gabriella’s father George is a serving Sergeant.
She said: “I’m very proud of her. She’s had a lot of family in the Regiment and she’s continuing the legacy.”
Major Dwight Robinson, the RBR’s Director of Music, added: “It all went very well. We’re concentrating on getting new interest in the Band from the schools.
“It’s a challenge, because schools music programmes have become victims of the pandemic and schoolchildren aren’t performing as much as they might do.
“The RBR is an opportunity for them to continue to play and in an environment that will challenge them, but not overwhelm them.”