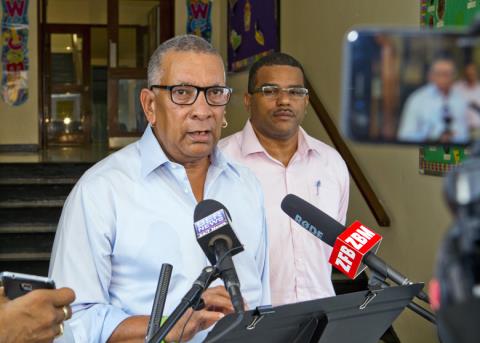 Speaking at the cross-Ministry news conference to update the public on the status of 31 public schools in the lead up to the September 11th re-opening date, Colonel Burch reiterated the Education Minister’s pledge to extend the school maintenance system into a year-round plan. But he said it’s obviously impossible to finish major repairs during a two-month period when the schools are closed.

“In everything there is room for improvement, and one of the things that we have identified over the course of the last six weeks that we’ve been in Government is that the process for reporting and recording maintenance issues in the schools is flawed,” said Colonel Burch.

Moving forward, he said: “We will start immediately after school opens with getting the same teams around the table to come up with a plan for how we record those items and how we come up with a strategy and a scheme for continuing maintenance during the course of the school year and not just wait until summer to being the process that is obviously impossible of being completed in the two months that you have for the summer break.

“Clearly there are going to be issues as teachers and custodians move back into schools over the course of the next several weeks. We have teams that are standing by to address those concerns. As you probably can appreciate, dealing with 31 schools you are likely to have missed something during the course of this process. All that teachers and custodians need to do if it maintenance issues that affect our Ministry is to dial what we call 911 in terms of Ministry help and we will address whatever issues are required in schools to ensure that they’re open in September.”

During the question and answer period, Education Minister Diallo Rabain told the media that the remedial contract to remove mould at Dellwood was approximately $450,000.

“I will let the public know that it was indicated that the works needed to fix Dellwood would take approximately six weeks. We are now three weeks into their contract and when I say hats off to the hard work that these workmen have put in, they have put in the hard word to get it ready to the point that it is now. And we were very hopeful that it would be able to open but that is not going to be possible. The temporary location will be no longer than two weeks,” said Mr Rabain.

“Once the schools are ready and we have been working with them very diligently, we will be looking at maintenance protocols that will continue throughout the year and not just during the summers. That is the guarantee we will offer that this Government is committed to proving a safe environment for our teachers and our students to attend schools.”

Asked for assurances to parents that the public school buildings are safe, Mr Rabain replied: “We cannot make guarantees stating anything will come up. I can guarantee that we will look into the options and look into the issues that do arise and make corrections when they do arise.”

Colonel Burch added: “I think that it’s important to note that the Ministry of Health… have been involved and are inspecting every school where there is issues with mould and air quality and water. One of the issues that the Minister may be a little reluctant to raise is with teachers. And we’ve had this discussion with the BUT (Bermuda Union of Teachers) and with Dellwood last night.

“Many teachers like to hoard, and particularly paper, which is a magnet for mould. And we are going to take some steps and some intervention with each school, to see how we can address that during the course of this school year.”

Responding to a follow up question on whether or not he was blaming mould in the schools on teachers, Col Burch replied: “No I am not blaming mould on teachers hoarding paper – did you hear what I said? What I said was paper is a magnet for mould.

“The real problem with mould in this country because everybody here has mould in their house. The real problem is opening windows and getting fresh air into schools. And so we’ve come up with a programme that has been implemented with the custodians in every school in the country so that we can ameliorate the problem of mould being grown in the schools going forward.”

Mr Rabain also noted that the new PLP administration “will undertake a comprehensive, structural, electrical, mechanical and health and safety review of every school, something the SCORE Report only touched on but didn’t go into in great depth”. Said Minister Rabain: “We will go further than what the SCORE Report did, and we will have complete reports on all of the schools and what state they truly stand in.”

On the Bermuda Union of Teachers meeting to be held tomorrow morning, the Minister said: “I’m hopeful that teachers will be happy and ready to go back to school but I cannot predict what will happen in the meeting that they plan to have on Friday.” 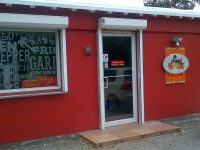