Updating MPs on the latest status of the Audited Financial Statements of the Bermuda Housing Trust (BHT) for 2017/18,  Public Works Minister Lieutenant-Colonel David Burch said today that “not only are they up-to-date in their annual audits but are also in a healthy financial position”.

In  a Ministerial Statement delivered on the floor of the House this morning, the Minister said: “This is no accident – but can be attributed to the stellar work of the Trustees, ably led by their Chairman, former member of this House – the Hon. John Barritt, JP, and the Deputy Chair, Senator Vance Campbell, JP – both of whom are present in the gallery.”
The Trust owns five developments, including Elizabeth Hills with 22 units – 21 residents, Heydon Park with 19 units – 23 residents, Purvis Park with 23 units – 25 residents, Ferguson Park with 19 units – 19 residents and Dr Cann Park with 100 units for 104 residents. or a total of 183 units and 192 residents.
In all there are a total of 183 units and 192 residents.
Colonel Burch explained that in recent years, the focus of the trustees has been on “strengthening the financial position of the Trust so that its commitment to its tenants, our seniors, of never raising rents on sitting tenants can be achieved”.
“Whatever else happens, those seniors have been able to count on no increase in rents  for the duration of their tenancy.
“Notwithstanding the above commitment, the BHT nonetheless faces increased costs, particularly when it comes to the maintenance of its properties. Provision
has to be made each year not only for on-going regular maintenance but the extraordinary and the unexpected, which occurs regularly with an ageing housing stock. Some of the units date back to the early 1970s,” he added.
“BHT also continues to carry an outstanding loan taken out in 2006 to help fund the construction of its most recent development, Dr Cann Park. It was a ten-year construction loan in the amount of $12.5 million. The loan has since been renegotiated with the amount now owing of $6-million.”
On that note he said: “The trustees have consistently paid the loan down and in recent years have made principal payments of up to $200,000 per annum, over and above the monthly payments required under the loan. Incidentally, one of the terms of the loan is that BHT set aside $20,000 a month to build up a maintenance reserve for both the expected and unexpected at Dr. Cann Park and that account currently stands at just over $800,000.”
Indicative of the fact that seniors represent the fastest growing segment of Bermuda’s population, which now stands at about 48 percent, the Minister noted that the BHT “has a consistent waiting list of between 45 to 55 persons”.
“The trustees are therefore acutely aware of the need to develop another property to provide more homes for seniors in need,” said Col Burch.
“The mandate of the BHT under its 1965 Act is:  “… to initiate and administer one or more schemes for the  relief of poverty , suffering and misfortune among elderly persons in Bermuda by the provision of accommodation for such persons on favourable terms,” he added. 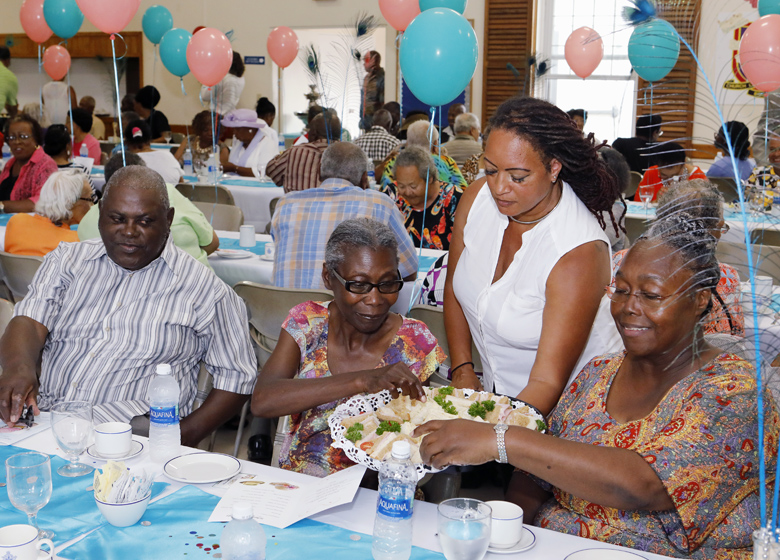 “This mandate has been interpreted over the years to mean that the Trust makes accommodation available to those seniors in need who are capable of independent living i.e. on their own, and, where appropriate, for so long as possible, by linking them, to supportive community services.”
With that in mind, he said: “The trustees have therefore also been quietly but prudently saving in order to develop a sixth property. The aim in the current, and coming
years, is to launch a major fund-raising effort to help realise this goal and to meet this most pressing need – affordable accommodation for Bermuda’s largest growing demographic – seniors.
“To this end, the next project, which BHT has initiated is the remediation and renovation of a cottage in Southside, St David’s, which is to be converted into two (2) apartments. The house is located on Westcott Lane next to Ferguson Park. This project is a start, a welcome start, to what the Trust has in mind. It is the model of a Government-Trust partnership, a public-private partnership with the Bermuda Housing Corporation, who will provide technical and oversight support for the project at no cost to the Trust.
“This will help to keep costs down as the Trust looks to provide the necessary funding for the actual work. The plan is to continue to use this model on future projects, particularly for the sixth development the Trust is about to undertake.
“It is an ambitious agenda for an organisation as small as the BHT that has one full-time Office Administrator and three part-time staff, providing assistance in various
capacities, but who together collectively oversee the Trust properties and their resident population.”
The Minister also noted that the ten trustees are all volunteers “who have demonstrated their unwavering commitment to our seniors – they are a hard-working and committed group who I would like to publicly thank and commend for their tireless efforts. The ministry looks forward to developing and expanding this partnership in support of our senior population”.

Darrin Simons Officially Sworn In As The New Commissioner Of Police