Climate Impact Of A Transatlantic Flight Could cost Global Economy $3,000 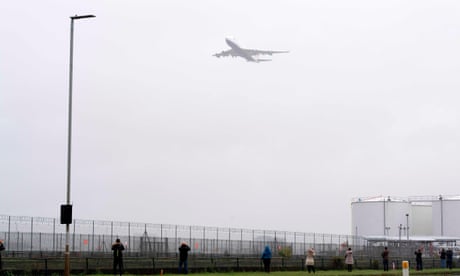 The Guardian: LONDON, England – A return flight from the UK to New York could cost the global economy more than $3,000 (£2,170) in the long run, owing to the effects of the climate crisis, according to a report.

Researchers examined the economic cost of the climate crisis and found it would cut about 37% from global GDP this century, more than twice the drop experienced in the Great Depression.

For every tonne of carbon dioxide emitted, the global economy would be $3,000 worse off by the end of the century, they estimated.

The research was conducted by experts from Cambridge University, University College London and Imperial College London, as well as international partners from Switzerland, Germany, the US and Austria.

Most estimates had assumed fires, floods, droughts and other impacts of the climate crisis did not affect economic growth, the authors said, but there was “mounting evidence to the contrary”.

“Climate change makes detrimental events like the recent heatwave in North America and the floods in Europe much more likely,” said Dr Chris Brierley from University College London. “If we stop assuming that economies recover from such events within months, the costs of warming look much higher than usually stated.

“We still need a better understanding of how climate alters economic growth, but even in the presence of small long-term effects, cutting emissions becomes much more urgent.”

The economic impact would depend on how much countries were prepared to do to fight the climate crisis by reducing emissions, said Jarmo Kikstra at the International Institute for Applied Systems Analysis and Imperial College London.

Dr James Rising, at the University of Delaware and London School of Economics and Political Science, said: “The more we know about the risks of climate change, the more urgent action becomes. Every year we have seen more natural disasters linked to climate change, and the situation is going to keep growing worse until we can achieve global net zero emissions.

“One of the big steps forward in this work is to start capturing the risks of natural disasters, or climate variability, in cost estimates rather than just average changes in temperature.

“While climate variability does not change the long-term best estimate of climate change impacts by all that much, it increases the range of risks, and those events can have long-lasting effects.”