Jamaica Observer: KINGSTON, JA – British shoe company Clarks has been forced to release another tranche of its hugely popular Jamaica tribute collection which was released in March of this year and sold out within two days. The company said three of the styles will be restocked in October of this year due to the overwhelming demand.

The company’s Chief Marketing Officer Tara McRae noted that Clarks was excited to launch this collection, which celebrates a truly special connection that Clarks have had with Jamaica, since our profiles first hit the streets there almost 60 years ago.

“The collection re-works three of our most iconic styles and is filled with exclusive new materials, patterns and colourways to pay tribute to the individuality that Jamaica is famous for. It’s amazing that a company based in the UK has had such a profound international impact and we are massively proud that the quality of our shoes is recognised globally,” she added. 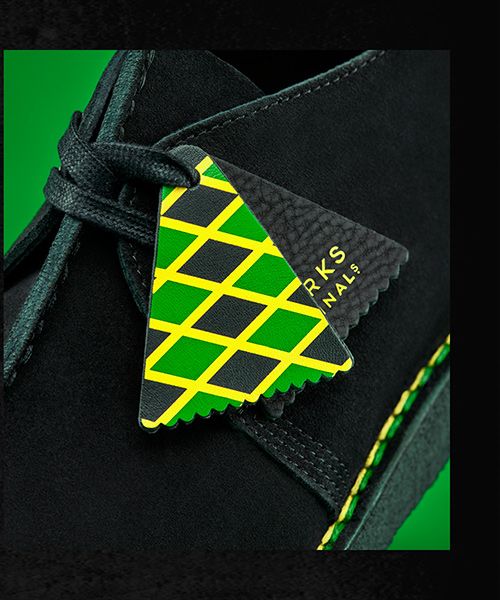 The styles are: the limited edition Desert Boot, renamed Desert Jamaica, which sees the striking green and gold stitching accentuating the classic black suede upper. This shoe also features the legendary Trek Man, known in local circles as the Bank Robber, in silhouette. The boot is finished with a custom fob, ankle loop and footbed in a design inspired by the Jamaican flag. This style also comes in a bold yellow.

The third is a take on the Wallabee Boot, known as the Jamaican Bee. This tribute shoe comes with a bold pattern inspired by the Jamaican flag which circles the ankle trim and is featured on the heel and footbed as well, all against the classic black suede of the boot. While the fourth style is the Jamaica Trek, a version of the Desert Trek which features a classic crepe sole, the flag-inspired, bold pattern on its heel loop and footbed. The Jamaican colours are continued in the custom fob, the stitching on the heel counter and the coloured lace ends.

The company is yet to decide which three styles from the Jamaica collection will be re-released in October.

The inextricable link between Clarks and Jamaican popular culture has been clear over the years. Jamaican/British professional footballer Raheem Sterling was made an ambassador for the company and offered his own style from Clarks. Popular reggae singer Chronixx also represented for the shoe brand and was featured in an ad campaign.

In April a number of Jamaican artiste led by Grammy award-winner Koffee were featured in the latest promotional campaign for the shoe brand Clarks. Koffee, along with recording artistes Sevana, Lila Ike, Protoje, performance poets The No-Maddz and British rapper M1llionz, as well Sterling were featured in the production Clarks and Jamaica, which looks at the connection between the popular shoe brand and the island.

First Premier’s Concert Held In Two Years Due To COVID