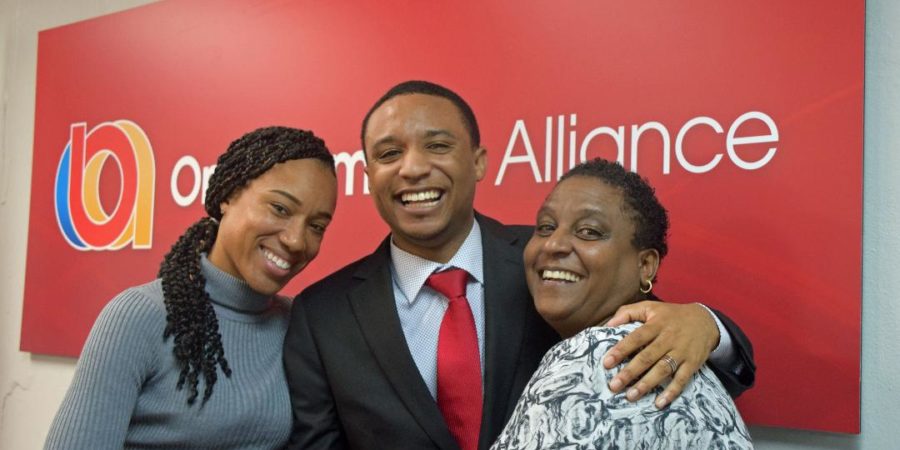 The One Bermuda Alliance today unveiled Senator Dwayne Robinson as the OBA candidate to vie for the seat left vacant by the late Walton Brown Jr, to go up against the Progressive Labour Party’s Senator Jason Hayward.

The bye-election for constituents in Constituency 17 Pembroke Central go to the polls on November 21 – Nomination Day is this Thursday, November 7.

Speaking at a news conference held at OBA headquarters at noon today, Senator Robinson said he was “enormously proud to be given the opportunity to serve”.

“I am enormously proud to be given the opportunity to serve the people of Pembroke Central,” said Mr Robinson, who has just returned from his honeymoon after getting married to his wife Reshay.

“Mr Robinson, 25, lived in Albert Row until the age of 14 and went to Somerset Primary school and CedarBridge,” the OBA said.

“He has volunteered at the SPCA, Big Brothers Big Sisters and the Family Learning Center. He went to India with Raleigh International and when he returned, he continued to help with Raleigh, helping to train other students for their overseas trips.

“He also volunteered with The Regiment and was about to take exams to become a Lieutenant when he was asked to serve as an OBA Senator.”

“I saw the vision laid out by Craig when he scouted me. It was a vision that I supported, having a more efficient government, fiscal responsibility, accountability, creating a future where we’re not having to tax our people, where we’re able to get foreign investment to support Bermudians growing up.

“I feel like the One Bermuda Alliance has a way better plan for the country and at the end of the day, it was always country first for me.”

OBA Leader Craig Cannonier said he had no hesitation in agreeing that Senator Robinson should be the candidate for C17.

His businesses have yielded the opportunity to work with many artists over the years, and he has served as the executive producer of short films, music videos, photoshoots, YouTube videos, adverts, and other content.

He produced a film called “Confessions: The Power of Birth” which won the Bermuda Society of Arts competition and was shown at BIFF.