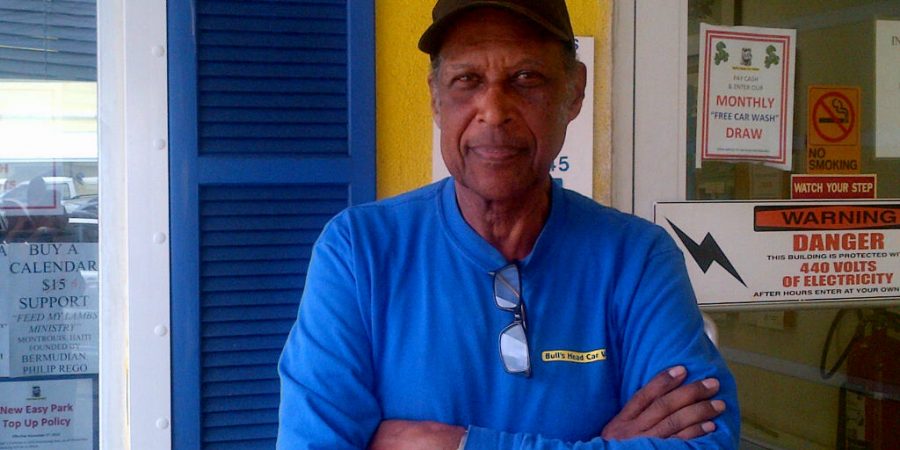 A steady decline in business volume, coupled with more tax increases has placed small businesses like Bull’s Head Car Wash on the brink of extinction.

Owner Art Riviere, 75, who formerly ran the Wok on Bermudiana Road for nearly a decade before opening the auto cleaning family business in 2005.

After hearing the new Budget Statement by Finance Minister Bob Richards, he sat down with Bermuda Real to discuss the impact on business. Like many small businesses he said he’s already behind in paying taxes while struggling to keep the “business head above water”. Art Riviere, Bull’s Head Car Wash Owner

“We could have done without the Payroll Tax increase, I’m already having a difficult time making the rate I pay now,” said Mr Riviere.

“I have a saying what I was robbing Peter to pay Paul, now Peter has run out of money as well. I’m still behind from last year, and the year before that too,” he said.

“That puts me at 11.25 percent, per quarter, per employee up to now. So when that goes up an extra one percent on April 1st, that now puts me at 12.25 percent, which means it’s more difficult to meet that financial commitment.

“We’re already having a hard time with the percentage that we’re dealing with now because we do not have the volume of business to support the operating expenses that the Government is putting on us. And it’s the same story with all of us small businesses because some of these expenses we cannot pass on to the customer. The cost of our service is already high.

“The president of the Bermuda Chamber of Commerce said between 2009 up to now the island has lost 5,000 – that’s a lot of people! And these are people who eat in restaurants, get their car washed, go to get their clothes cleaned – so that’s a big loss to the island; and we have to be realistic because the size of the market is shrinking,” said Mr Riviere.

He noted that business volume at Bull’s Head Car Wash has been on a steady decline since 2007.

“Now is that because people don’t want to wash their car and take care of their investment – I don’t think so! And there’s a large percentage of people who say ‘I haven’t gotten a raise for six or seven years’, therefore, washing the car is not that important.”

With the cost of living going up while pay cheques remain the same, understandably, he said more people have to sacrifice while struggling to make ends meet.

“They have to leave something out because the electric light bill has to be paid, they have to buy food and keep a roof over their heads. And so, yes, they decide the car will have to wash itself.

“Apart from that we’ve had a large percentage of customers who left the island. But operational costs don’t go down with volume,” he added.

“And the City of Hamilton just increased their taxes as well, that means I’m falling behind through no fault of my own,” said Mr Riviere.

While the Finance Minister has stated that the recession is over, he said: “As far as I’m concerned we still have a weak economy. I know the Minister said the recession is over. But he also said that doesn’t mean that you’re going to get a raise, or that there’ll be more jobs either! All that means to me is nothing’s changed.

“Maybe is I’m a MarketPlace or a gas station – they should still be doing pretty good as people have to eat and need gas for their vehicles. But businesses like mine are still suffering and it looks like there’s still a tough road ahead this year as well.”

At 75-years-old he said he’s in month position to even think about retirement.

“Some of us cannot afford to drop out of business, I have a bank loan commitment. It will be like dominoes, if one drops there goes the whole ‘shabang’,” he said.

“I employ five people who have bulls and challenges of their own, they have their own families to take care of, etc. All I can do is just keep on doing what I’m doing as I don’t have control over this. And I cannot operate with less than five employees to run this business, and I’m barely affording that as it is!

“I’m behind in paying some of my taxes – I’m behind in social insurance and payroll tax – like most of us – we’re all behind!”

Admittedly, he said: “There are some businesses that are just plain careless in paying their bills while we want to be up to date. But the reality is that if the business is not strong enough, or you’re just not making it, then there’s some bills that just have to be compromised. And that’s what’s happening!

“So when I hear taxes are going up again I just shake my head and ask how can we do it – we can’t! The cost of my service for instance, is $35 to wash a car, I can’t charge more than that or else people would say ‘I will go wash my own car or just let the rain do it’. So my hands are tied!

“All these expenses that put on me now I can’t pass it one to my customers. That would be a formula for failure, and I can’t afford that either!

“We’re all tied into this debt situation altogether. The Minister has the responsibility for paying the island’s debt, but when he comes to us to help, we’re not in a position to help – I know I’m not!”

Looking at the projections for the year, he said: “This too will be another difficult year! At this point I have sleepless nights just thinking of what I can do different – what can I do better when I have no control.

“We’re doing the best we can to get customers to come back, but the reality is you only have so many customers out there.

“And I don’t think the 5,000 residents we lost can be replaced. At this point we even have Bermudians leaving the island when this is their home, and their running away to try and find something better somewhere else – and that’s not good!

“I’m 75-years-old and I’m still having to struggle to make a living and I’m not alone. A lot of seniors are living their golden years that are not so golden for far too many.”