Home Affairs Minister Walton Brown told MPs on Friday that “Bermuda is witnessing a fish die-off of a magnitude not seen since at least 2009”.

Speaking on the environmental issues that has been occurring this month, the Minister said “the evidence of this phenomenon” continues to come in to the Department of Environment and Natural Resources.

Updating MPs in a Ministerial Statement, Mr Brown said: “This die-off has been affecting a wide range of fish species – “from butterfly fishes to parrotfishes to large black groupers”. 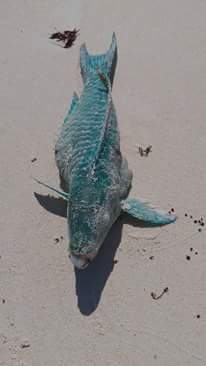 And while “it is not unusual to see fishes dying at this time of year, when the seawater is at its warmest”, he said: “Increasing temperatures reduce oxygen levels in the water, which affects some species of fish. Further, warmer temperatures stimulate the growth and reproduction of bacteria, viruses and other parasites that are naturally occurring in our waters, which can affect fish health.

“In the last couple of weeks, however, it has become apparent that Bermuda is witnessing a fish die-off of a magnitude not seen since at least 2009,” said the Minister.

“The reasons why so many fish have affected this year are not clear, but technical officers are almost certain that water temperature has played a large part in the deaths.

While noting that “it is difficult to determine the cause of a fish’s death after it has been dead for a while, due to secondary infections that take hold after death”, he said “technical officers searched for fish that were clearly in poor health and but not yet dead, in order to determine why so many fish were dying”.

“With the help of several individuals, notably Dr Thaddeus Murdoch, Mr Jirani Welch and the Department of Parks staff, a few dying and freshly dead fish were collected for examination. Officers examined several organs from the collected specimens and found that the gills of each specimen were heavily infested with a mobile, single-celled parasite that resembled Brooklynella.

“This species was linked to the fish die-off event in 2009,” he said. “The other organs from the examined specimens did not show any obvious signs of pathogenic effects,” said Mr Brown.

“In large numbers, Brooklynella parasites can cause serious damage to the gills of a fish, which makes it more difficult for the fish to acquire oxygen from the water. This generally leads to the fairly rapid death of the fish. When the water gets warmer, the life cycle of this parasite accelerates and this is compounded by the fact that fish are often stressed when the water is warmer anyway.

“Unfortunately, there is nothing we can do to prevent deaths of this nature,” the Minister said. “Nevertheless, I would like to stress the importance of investigating events such as this, to confirm the cause of death and make sure that any actions that can be taken to preserve our marine environment are put in place whenever possible.

“Fortunately, seawater temperatures now appear to be dropping in the wake of recent storm activity and it is anticipated that, with cooler water temperatures, fish deaths will decrease,” he added.

A number of MPs raised concerns on the possibilities of infected fish reaching dinner plates for human consumption. One MP wanted to know if it was still a good idea to eat sushi in light of the recent outbreak.

The Minister noted that the high grade of fish used for sushi is generally imported. At one point he jokingly said he would be “elated” to blame the affects of global warming in Bermuda on the former One Bermuda Alliance administration, but in reality he said that is not the case.