Seven long years after British grandmother Lindsay Sandiford has been locked up in jail on the paradise island of Bali on death row, after she was sentenced to death in 2013 for smuggling £1.6million of cocaine into Indonesia in her suitcase.

Indonesia carries out executions infrequently with most prisoners waiting on death row for more than 10 years.

The punishment in Indonesia is brutal – most drug smugglers and dealers are sentenced to death.

And the execution method is terrifying – firing squad.

The Mirror reports: “Prisoners are led to a grassy area where they can choose to sit or stand before armed soldiers then take their shots, aiming for the heart.

“But if a prisoner survives the firing squad, the commander must then shoot them in the head.

“The last death penalties carried out in Indonesia took place in 2015 and 130 people, including Lindsay Sandiford, are waiting to be executed.

“Former legal secretary Sandiford, from Redcar in the North East, had worked in management for many years at a law firm in Cheltenham.

“She rented a house in the town but was evicted when she didn’t pay her rent.

“The mum-of-two, who had separated from her husband, made the decision to move to India in 2012.

“However, the gran dramatically changed her story when she was told she would receive the death penalty if she was convicted of drug trafficking.

“She broke down and told officers that she had been asked to carry the drugs by an antiques dealer, Julian Ponder, who was British and living in Bali, and his partner Rachel Dougall.

“Sandiford even agreed to take part in a police sting to catch the pair, along with a third person, Paul Beales.

“Ponder’s home was searched and both he and Sandiford were charged with drug trafficking.

“There was no evidence linking Dougall and Beales to the same crime and they were charged with lesser offences.

“Sandiford’s legal team argued that she had been pressured into carrying the drugs and had suffered from mental health problems.

“Their pleas fell on deaf ears and she was convicted – although even the prosecution pleaded for her to be jailed for 15 years rather than sentenced to death.

“Dougall was found guilty of failing to report a crime and jailed for a year, while Beales was convicted of possessing hashish and locked up for four years.

“Despite the prosecution’s pleas, on January 22, 2013, judges sentenced her to death.

“Sandiford appealed against the decision but she had no money left to pay for a legal team.

“A fundraising campaign managed to raise enough to fly an Indonesian solicitor to Bali but her appeal was dismissed.

“Sandiford then appealed to the Indonesian Supreme Court, which was also rejected.

“Ever since the gran has been held in Kerobokan Prison, in Bali. 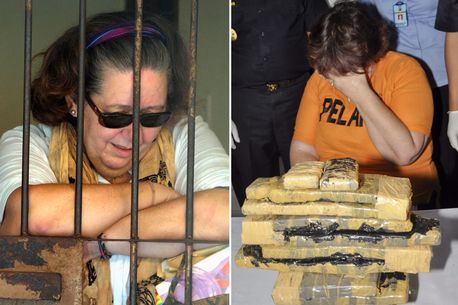 “The jail was built to house just 300 inmates but is currently home to more than 1,400 men and women,” the report said.

“Riots and violence from guards is a regular occurence.

“Sandiford spends her time behind bars knitting items, which she then sells to raise funds to pay for her legal appeals.

“She has even been teaching other prisoners how to knit.”

According to the report, Sandiford says “she has accepted her fate and feels ‘blessed’ that she saw her sons grow up.

At last check, the report said: “Sandiford is believed to still be awaiting execution in Bali.”

OBA: ’97 Delegates Made A Choice That All Of Bermuda Must Live With — Another Four Years With David Burt’