Another six protesters were formally charged this morning in connection with the December 2nd airport protest. But unlike his co-defendants, Bermuda Public Services Union (BPSU) President Jason Hayward opted to stand trial in Magistrates’ Court, while the remaining five plan to stand trial before a judge and jury of their peers in the Supreme Court.

Traffic was blocked off on Court Street as a large crowd of roughly 400 supporters stood outside the Dame Lois Browne-Evans Building during the proceedings.

With the exception of Mr Hayward, all five of the defendants represented by lawyer Delroy Duncan, refused to consent to have the matter heard in Magistrates’ Court. Mr Hayward, who was  represented by lawyer Charles Richardson, consented to have his matter heard in the lower court. He’s now due to return to court on May 3rd, to be provided with the disclosure of evidence from the Crown, represented in court today by the Director of Public Prosecutions Larry Mussenden. 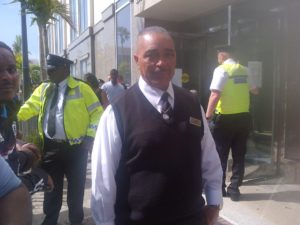 All six defendants were released on $1,000 bail. The five bound for Supreme Court are now added to the list of defendants due to appear during the next arraignment session on May 1st.

The pubic gallery was filled to capacity once the Plea Court session got underway. Among those in court to observe the proceedings were a number of Progressive Labour Party MPs, including Opposition leader David Burt, Derrick Burgess, Wayne Furbert, Michael Scott, and former Premier Dame Jennifer Smith.

Once papers were signed, the defendant were greeted with a loud round of applause as they emerged from the building, with Mr Furbert raising his fist in solidarity with the supporters gathered outside.
Carrying placards that said ‘OBA One Big Act’, ‘They will not be silenced’ and ‘Peer Review Committee no comment’, the group marched back to union headquarters where another meeting was held just after 11am. Bus operators who turned up to show their support were back on the job by 1pm.

A total of 15 summonses have been served. To date, nine defendants have been charged, with another six due to appear in court next week.