New York Daily News: President Trump paid just $750 in taxes in 2016 and the same sum in 2017, according to a bombshell report published Sunday.

He paid a big fat zero in income tax in 10 of the 15 previous years, the New York Times found.

The report comes after years of fervent speculation about Trump’s taxes, with rivals, reporters and fans alike wanting to know just how much tax the self-proclaimed billionaire really pays.

Tax records obtained by the Times show he “takes in hundreds of millions of dollars a year yet racks up chronic losses that he aggressively employs to avoid paying taxes.”

The article noted the tax returns just reflect what he was willing to disclose to the IRS and don’t suggest any new links to Russia, a long-standing subject of speculation given the Mueller investigation and Trump’s public admiration of Russian strongman Vladimir Putin.

What the tax returns do show is that Trump’s “finances are under stress, beset by losses and hundreds of millions of dollars in debt coming due that he has personally guaranteed.

“Also hanging over him is a decade-long audit battle with the Internal Revenue Service over the legitimacy of a $72.9 million tax refund that he claimed, and received, after declaring huge losses. An adverse ruling could cost him more than $100 million,” the Times reported. 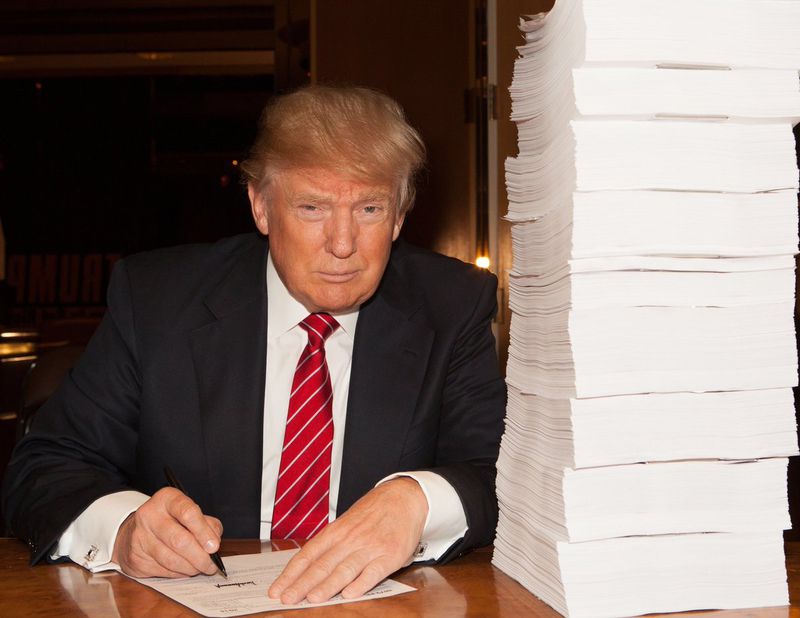 A lawyer for the Trump Organization went into spin mode over the report.

“Over the past decade, President Trump has paid tens of millions of dollars in personal taxes to the federal government, including paying millions in personal taxes since announcing his candidacy in 2015,” Alan Garten said in a statement to the Times.

But the article noted Garten appeared to be mixing up income taxes with “other federal taxes Mr. Trump has paid — Social Security, Medicare and taxes for his household employees.”

True to form, Trump on Sunday dismissed the report as “fake news.”

He refused to answer reporters’ questions asking how much he paid.

In 2016, Trump infamously bragged that avoiding taxes “makes me smart.”

The Times report showed how the president is trapped in a “tightening financial vise.”

Trump raked in $427.4 million from his starring role in “The Apprentice” over the years, then invested much of the funds in his businesses, mainly golf courses, according to the Times. But most of his main undertakings reportedly lost up to tens of millions of dollars per year. Noting that “his properties have become bazaars for collecting money directly from lobbyists, foreign officials and others seeking face time, access or favor,” the Times found a wave of new members at his Mar-a-Lago club in Florida brought him an extra $5 million a year since 2015.

A roofing materials company reportedly spent $1.5 million at one Trump golf resort in 2018 at the same time the industry was lobbying for the end of federal regulations.

And Trump raked in a few million from “from licensing deals in countries with authoritarian-leaning leaders or thorny geopolitics.” Those include “$3 million from the Philippines, $2.3 million from India and $1 million from Turkey.”

The report also notes the president’s daughter and adviser Ivanka Trump apparently received consulting fees from the Trump Organization at the same time she was an employee of the company, a move that “helped reduce the family’s tax bill.”