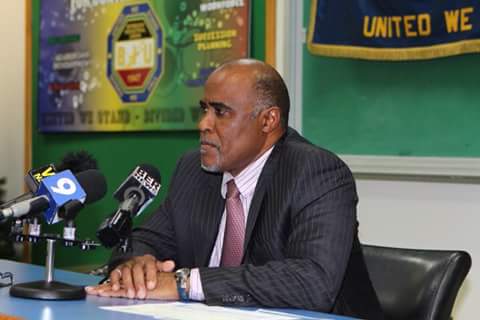 Bermuda will always have to bring in up to 6.000 people to fill jobs, based on our small population. And there’s nothing wrong with that as far as Bermuda Industrial Union President Chris Furbert is concerned.

But he said it’s frustrating when you hear countless stories about Bermudians not being able to get a job, when they see non-Bermudians gainfully employed.

The main objective of the new Immigration Bill passed in the House last Friday, he said, was to “make sure Bermudians come first in their own country”. “And it’s absolutely nothing wrong with that,” said Mr Furbert.

While speaking at a news conference held at BIU headquarters yesterday, Mr Furbert was asked for his views on the general state of labour relations in Bermuda today.

“I can say that whilst the Government changed some 900 odd days ago, I don’t think it’s a hundred days yet, it’s probably getting close to 100 days. I honestly feel that we’ve had a meeting with the new Minister of Home Affairs, and whilst some people might be a bit upset with him because of his new policy, that he’s saying he wants to put Bermudians first, I don’t see anything wrong with that.

“The issue for what we have to understand as a country, as long as we’re going to need at least somewhere between 33 to 34,000 workers here in Bermuda, we’re always going to need to bring people in, because we don’t have 33 to 34,000 Bermudians to fill all of them jobs.

“We got about 27,000 to 27,500 Bermudians, so we’re always going to have to bring in about 5 to 6,000 people. And all he’s saying right now is that ‘I want to make, contrary to what the OBA government did, I want to make sure that Bermudians come first in their own country’. And it’s absolutely nothing wrong with that,” Mr Furbert said.

“We’re not saying that people can’t still be brought in you know. All we’re saying is that a Bermudian should be able to get employment in their own country. The union has been out there talking about this for the last three to five years,” he added.

The union leader concluded: “I think that the current Government has made up their mind that they want to try to improve that and they’re going to get our 100 percent support.

“Even if the OBA  government, if they would’ve taken that approach, they would have gotten our full support,” he said. “But they had made up their mind. They were about taking care of employers and not worrying about the workers. And that’s one of the reasons why they found their selves as the Opposition right now.”

The new legislation, passed in the House of Assembly on Friday, October 20th, is designed to “protect Bermuda for Bermudians”.

The new laws give the Bermuda Immigration and Protection Act priority over the Human Rights Act. It was introduced after a Supreme Court ruling in May 2014, that allowed certain holders of a permanent resident’s certificate to apply for Bermuda status.

Home Affairs Minister Walton Brown stressed that the intention of the Bill was to “restore the primacy of the [Bermuda Immigration and Protection] Act once enjoyed” and ensure that “Bermudians come first”.

He also noted that Bermudians continue to be economically disadvantaged, through unemployment, salary, and total jobs filled, according to statistics contained in the 2015 Labour Force Survey.

“It is for governments to pass laws not the courts. The court’s job is to interpret law. Only a weak government lets the courts decide,” said the Minister.

He also told MPs that he had been an advocate for human rights for more than 30 years, and he defended his party’s stance on human rights, and that it was the Progressive Labour Party that had extended rights to permanent residents.

He estimated that full immigration reform make take a year to implement, and that he will deal with the issue of PRC holders and status as a matter of urgency, especially for “people marginalised and people in limbo”.

The Minister stressed that it was important to distinguish between human rights and privilege because there’s a difference.

During the debate, Premier David Burt said the OBA objected to the Bill because it marked the death of the controversial Pathways to Status Bill.

“What this Bill represents to them is the end of their dream of Pathways to Status through the back door,” said Mr Burt. “That’s what they are trying to do.”

The Bill is now bound for the Senate for debate. Meanwhile, there’s no House of Assembly meeting on Friday, October 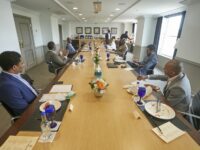