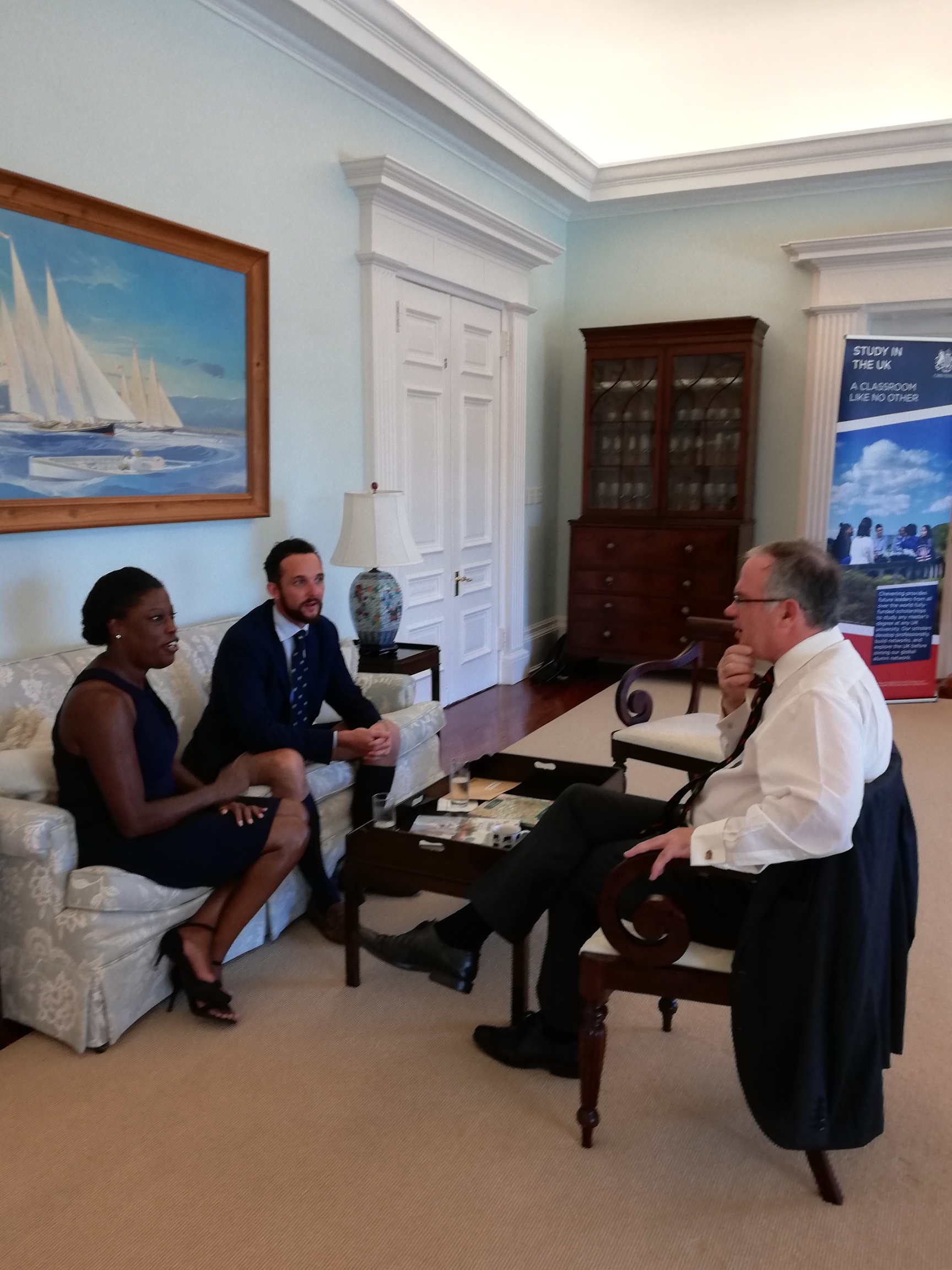 Last week Governor, John Rankin, welcomed Stratton Hatfield to Government House, to congratulate him on the award of a Chevening Scholarship.
Stratton, Director of Development at BE Solar, will undertake a Masters of Science in Sustainability, Entrepreneurship and Design at Brunel University.
Upon completing his MSc, Stratton plans to return to Bermuda to continue to help grow BE Solar and improve the renewable energy industry.
He intends to use his skill set to help develop and implement more sustainable environmental, social and economic practices and policies into Bermuda. Over 61,000 applicants applied for the Chevening Scholarship this year and Stratton was one of 1,500 worldwide to be awarded the scholarship.
Stratton stated: “I am honored to be a recipient of the Chevening award and to represent Bermuda on an international level.
“I look forward to making new connections with my peers and identifying ways to help Bermuda be a model for change with regards to Sustainable Development and innovation.”
Also in attendance was Pahn-ya Ratteray, a Bermudian Chevening alumna (2015-2016) who completed an MSc in Project Management at Robert Gordon University with the support of the Chevening Scholarship. 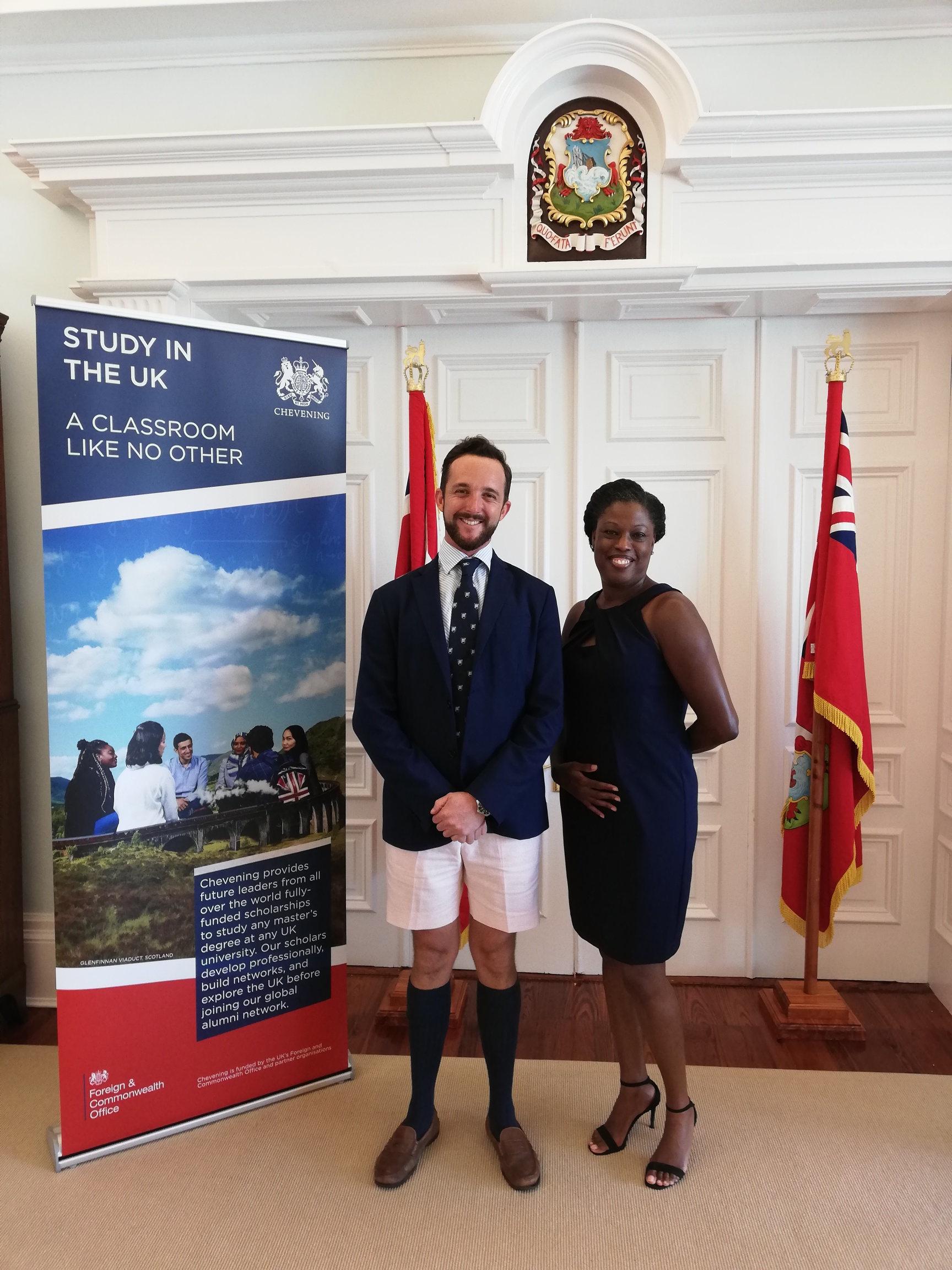 Applications for Chevening Scholarships to study in the UK are now open until 6 November 2018, with
applications to be submitted via www.chevening.org/apply.
Chevening Scholarships are awarded to individuals with demonstrable leadership potential who also have strong academic backgrounds. The scholarship offers full financial support for future leaders to study for any eligible master’s degree at any UK university whilst also gaining access to a wide range of exclusive academic, professional, and cultural experiences.
Over the last 35 years, 50,000 outstanding professionals have had the opportunity to develop in the UK through Chevening. There are more than 1,500 scholarships on offer globally for the 2019/2020 academic year, demonstrating the UK’s ongoing commitment towards developing the leaders of tomorrow. 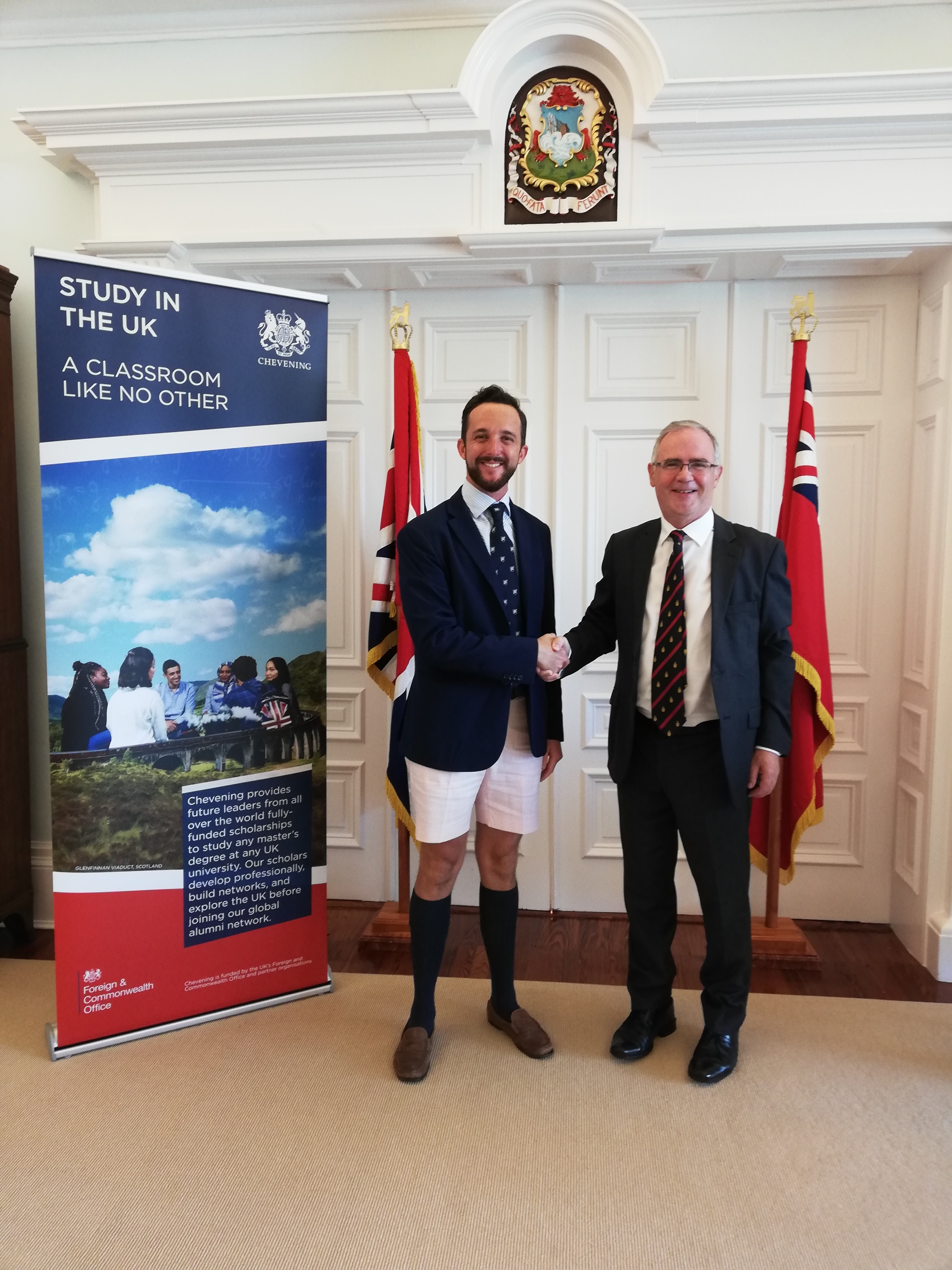 The Governor said: “I am delighted that we once again have a Bermudian Chevening Scholar and I wish Stratton well for his studies in the UK. And I very much hope that we will see another set of Bermudians applying now
for scholarships for 2019-2020.
“We are looking for ambitious, professional, forward-thinking leaders from any walk of life. There is no such thing as a “typical” Chevening Scholar, but one thing that all of our previous scholars have in common is that they were bold enough to step forward and apply.
“If you are chosen for Chevening, you will receive a first-rate UK education which can open doors in your career. You will also become part of the global Chevening Alumni network full of dynamic influencers who have shared the same experience as you will, and can offer mentorship, advice, and contacts.
There is a lot to potentially gain from submitting a thoughtful application, so if you or someone you know has what it takes to be a Chevening Scholar, I would encourage you to apply before the November 6 deadline.”
Head of Scholarships at the Foreign and Commonwealth Office, Ben Coates, said: “The UK continues to play a leading role globally. Home to some of the world’s best universities, brightest students, and most revered academics, the UK’s higher education sector promotes the exchange of information and ideas, as well as the building of knowledge and networks. Chevening Scholars find themselves immersed in that world, and emerge having grown academically, professionally, and personally as a result of their time in the UK.
“Chevening Scholars share the best their country has to offer with those they meet in the UK, and then share the best the UK has to offer when they return home. The role that the Chevening community plays in building bridges between countries is as important now as it has ever been.
“Over the last 35 years, many of those selected for this scholarship have gone on to become respected leaders across a range of sectors. Being a part of the Chevening network instils a strong sense of pride and responsibility, and I’ve personally seen how this opportunity has transformed lives.”
Chevening’s Head of Programme Management, Louise Thomson added: “Chevening allows you to explore whatever you’re passionate about. You can choose from over 12,000 master’s courses at over 150 different higher education institutions. UK institutions consistently rank highly in global university rankings, so be prepared for an academically challenging and fulfilling experience. However, the UK is a classroom like no other – you will learn so much outside of the classroom simply by interacting with people from all over the world, travelling around
the UK in your spare time, and getting involved in the communities you live in.
“Chevening organises an exclusive programme of events and activities, enabling you to experience Britain’s heritage and history, discuss international policy, and interact with thought leaders at a range of academic, cultural, and social events.
“Recently, scholars have visited 10 Downing Street in London, faced history at Edinburgh Castle in Scotland, climbed Mount Snowdon in Wales, stood pitchside at Old Trafford in Manchester, and witnessed the beauty of the Giant’s Causeway in Northern Ireland. Some have even visited Hogwarts at the film studio where the Harry Potter films were shot.
“With so much to learn and achieve, a year goes by in a flash. During this time, your academic knowledge deepens, your networks expand, and your ambitions evolve, leaving you motivated and better equipped to return home and achieve your dreams.”
The call for new applicants follows the selection of Stratton Hatfield scholars from Bermuda, who won an award to study at a UK university this year. Successful applicants have been sharing their stories through the #ChosenForChevening hashtag on Twitter and Instagram.
For more information visit chevening.org/apply/guidance for detailed information on the eligibility criteria and
scholarship specifications, or contact Sara Smalley at +1441 292 3600 or email executiveofficer@gov.bm.

Baby Orangutan Being Bottle-Fed, Which Intrigues Others