Premier David Burt, Education Minister Diallo Rabain and other MPS made their rounds yesterday at various schools where thousands of students started their first day of the new school year.

The Premier visited The Berkeley Institute and Northlands Primary School, while Mr Rabain greeted students at Elliot Primary School where his daughter Layla attends and later at CedarBridge Academy.

Elliot Primary and Purvis School students started their school year for the first time, in buildings fully equipped with Wi-Fi, as part of the new government’s 100-day pledge to bring the island’s public schools online in line with the age of technology.

This year saw a combined effort by the Ministries of Education and Public Works join forces with a host of volunteers who donated countless hours of their time through Work Rallies, to help get a number of schools in tip top shape by Monday.

The rallies, organised by Angela Young, also garnered the support of several Government MPs who chipped in to lend a helping hand. A number of private businesses and government workers also extended their services.

Those services included landscaping and trucking. The Public Works Ministry also waived tipping fees for the truckers who carted heavy items no longer in use away from several school properties, including Clearwater Middle School down at the east end.

In a cross-Ministry news conference held before schools re-opened, the Ministers of Public Works and Education disclosed plans to extend the Work Rallies initiative throughout the school year. 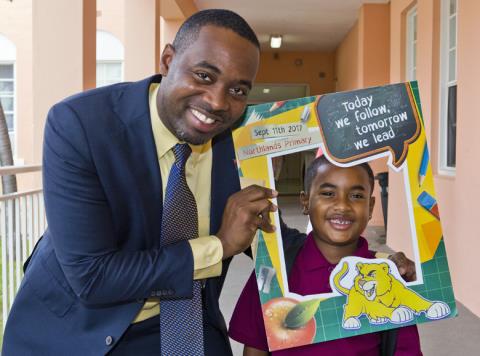 Colonel David Burch, who described the current system of doing major maintenance projects during the course of two months during the summer break as flawed, said changing the plan will get problems addressed as they arise, as opposed to waiting long periods for repairs.

A number of school principals and administrative officials also joined Work Rallies volunteers to help clean up school islandwide from Somerset to St David’s and St George’s. We’ll have a full report on the overall assessment of the first-ever Work Rallies initiative in a subsequent report.

Special Shout Out To CARE’s Graduating Class Of 2021 Who Waited A Whole Year For This Day!