BBC News: July 8, 2021 – There’s a debate in Australia about how to deal with a huge plague of mice across the east of the country. Poison? Regulator says no. Snakes? That could create another problem. So what then? Steve Evans of The Canberra Times goes in search of answers.

A friend of mine still remembers the last plague of mice.

They took over his house in Dubbo in northern New South Wales. They were everywhere, hundreds of them, coming under doors, running loudly in the loft, leaving a revolting stench, not least by dying in inaccessible cavities.

His answer was a brutal trap made of sticky paper. The mice would stick to it and he would drown them in a bucket. He still remembers the horror of the squealing.

In the current plague, all kinds of other ingenious methods have been devised.

Most hardware stores have run short of commercial mice traps, so people are improvising. One fills buckets with water and coats the rims with vegetable oil, placing a peanut butter lure in the water. Mice find the peanut butter irresistible and slip on the edge of the bucket to their doom.

“Plaster of Paris in flour will kill a mouse eventually but I prefer to see where the mice die and being able to get rid of the carcass,” Sue Hodge, a cleaner in the tiny town of Canowindra, three hours’ drive north from Canberra, told me.

She prefers traps, though they aren’t infallible. She reckons that what she calls “light-footed mice” can still lick a trap clean and get away alive.

Some farmers around here have turned whole shipping containers into traps. The trick is to lure the mice in their hundreds in at one end and funnel them through to the bait and a drowning in a tank at the other end.

But that is arduous and inadequate for the numbers involved, so some favour industrial scale poison.

In response, the government of New South Wales has allocated A$50m (£27m; $37m) in grants for a chemical called bromadiolone which has been described as “napalm for mice”. 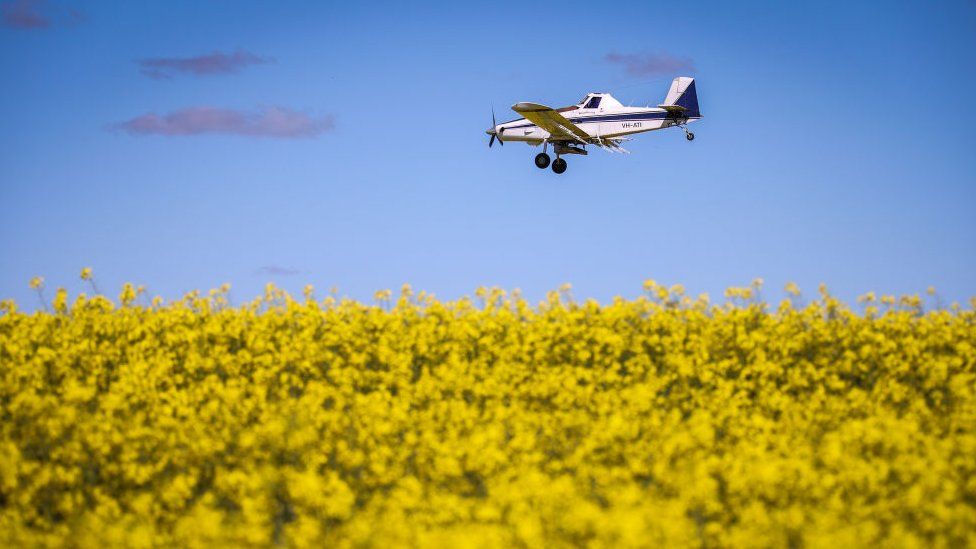 The snag is that it poisons pretty well everything else, too and destroys an eco-system.

The stuff kills mice within 24 hours but it stays active for months, and goes into the food chain as predators eat poisoned prey. That has now led the Australian Pesticides and Veterinary Medicines Authority to decline permits for its use in some places.

Other answers have been offered.

Dr Gavin Smith of the Australian National University says snakes, as natural predators of mice, would be a good antidote. He feels they should be allowed to do their natural work.

The snag with this holistic view is that they ARE doing it – there are reports that snakes are much fatter this year because of the abundance of mice. And the rodents are still multiplying.

Mice have bred like – well, I suppose you could say like rabbits – in Australia recently because of the end of the drought and the torrents of rain which have produced an abundance of crops. Thick crops mean good feeding for mice.

But there’s another factor – a bit of blowback from agricultural progress.

Land is much more intensively used these days as farming methods have improved. Sowing machines are now so accurate that they can plant seed far more precisely – within a few millimetres, in between last year’s stalks – so the previous season’s old growth doesn’t even need to be cleared away.

This abundant growth is perfect for mice – and for snakes. Progress has a cost.

Why is there a mouse plague?

Top Feature Photo: Copyright AFP – Australian farmers have been locked in a months-long battle with hordes of mice devouring their crops