Premier and Finance Minister David Burt, reported a “disappointing” return on the multi-million 35th America’s Cup, funded by taxpayers out of the public purse.

In terms of creating jobs through employment, he told MPs on Friday: “This marginal level of job growth is disappointing given the hopes that the Americ, ‘s Cup would stimulate the economy and employment.”

In his first Budget Statement, the Premier said: “Employment in Bermuda experienced marginal growth in 2017.”

Provisional estimates produced by the Department of Statistics, which cover employment changes between 2016 and 2017, show that “on aggregate the Bermuda job market reported its second increase in nine years.

“Much of the growth in jobs was fuelled by an increase in jobs filled in the restaurants, cafés and bars sector, which added 113 jobs (5.6%) while higher-paying positions within the international business sector only increased by six (6) jobs (0.2%).

“These increases were offset by declines in public administration, which shed 54 jobs (1.4%); education, health and social work, which shed 67 jobs (1.8%); other community social and personal services, which shed 158 positions (7.7%); transport and communications, which shed 47 positions (2.3%); and manufacturing, which saw 11 jobs (1.9%) disappear.”

But on the upside, Premier Burt said: “One of the major headwinds in our growth prospects is the level of employment.

“Although employment numbers are marginally positive, the pace of job growth must increase if we are to have a sustained economic recovery.”

He noted that in the first three quarters of 2017, “employment income grew by $77.2 million to $2.58 billion, an increase of 3.1 percent, and the official unemployment rate remained at 7 percent”.

In terms of tourism revenue, Bermuda recorded another year of growth.

“Air arrivals in 2017 grew by 10.3 percent, while the number of cruise passengers increased by 5.1 percent.

“Total visitor arrivals increased by 7.2 percent over the previous year.”

While reflecting on other economic indicators, like retail sales, which “increased by 2.9 percent or $32.7 million to register at $1.175 billion”, he said jobs in the sector rose by 0.7 percent.

“Imports increased by 17.6 percent in the first three quarters of the year to register at $849 million.

“This growth was primarily attributed to the imports of finished equipment, which grew by $65.1 million or 28.2 percent when compared with the first nine months of 2016. 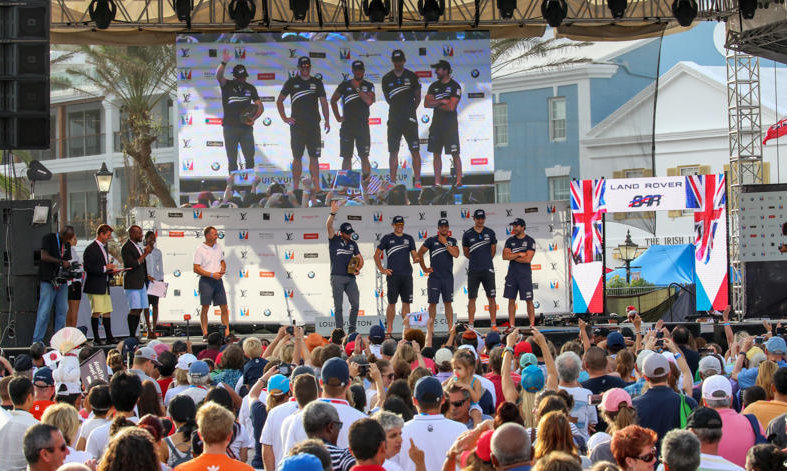 “These imports were related to Bermuda’s hosting of the 35th America’s Cup,” Mr Burt said.

“Other categories that contributed significantly to the positive results were food, beverages and tobacco, and machinery.”

He also noted that Bermuda’s Balance of Payments “remains strong and over the first three quarters of 2017 recorded a surplus on the current account of $672 million, which was $288 million more than the corresponding surplus in 2016”.

The increase was attributed to “changes in the primary income account, where there was significant growth in the net investment income account, which was the result of lower reinvested earnings and a decline in dividends paid”.

Some 793 new international companies and partnerships were registered in Bermuda last year, representing a 1.1 percent decrease compared with 802 registrations in 2016.

The year 2016 marked “the seventh year of economic contraction” in Bermuda in the last eight years.

Said Premier Burt: “This shows the urgency of the need to stimulate the economy and invest in long-term policies that will diversify the Bermuda economy and create sustained economic growth, which will increase jobs and opportunity at all levels of Bermudian society.”